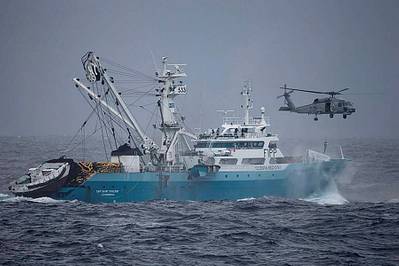 While patrolling in the Indian Ocean off the coast of Africa, Royal Australian Navy ship HMAS Darwin provided emergency medical assistance for a heart attack victim on a French fishing vessel.

The stricken French fisherman, who was suffering heart attack symptoms, was given initial medical assistance on board Darwin. The fisherman was conscious and able to walk. He was then air lifted to Dar Es Salam, Tanzania where he is now in hospital in a stable condition.

“Today we provided assistance to a fellow mariner who needed our help. We worked closely with Combined Maritime Forces to quickly and safely perform this medical evacuation. It was pleasing to assist this French national whilst also contributing to our mission,” Commander Morrison said.

“This AME comes only six weeks after Darwin worked closely with Pakistan to save 13 fishermen shipwrecked and adrift for five days in international waters,” he said.

Leading Seaman Stephen McGreal was one of Darwin’s aircrew who helped winch the French fisherman by stretcher up to Darwin’s helicopter. “It was awesome to be involved in this evacuation”, he said. “I feel proud to have been part of the team that helped this fisherman”.

Acting Commander of Joint Task Force 633, Commodore Phil Spedding said that being able to support other vessels in the maritime environment is one of the most important roles a ship can provide.

“Being able to render assistance to a stricken sailor at sea is something that all mariners are prepared to do when a distress call is made,” Commodore Spedding said.

“Darwin and her ship’s company have on this occasion been able to provide assistance and ensure that appropriate medical care was provided to the sailor and facilitate transport to allow further treatment to occur.”

HMAS Darwin is currently deployed to the Middle East Area of Operations (MEAO).

This is the 57th rotation of a Royal Australian Navy warship to the MEAO since the first Gulf War in 1990 and the 33rd deployment under Operations SLIPPER.