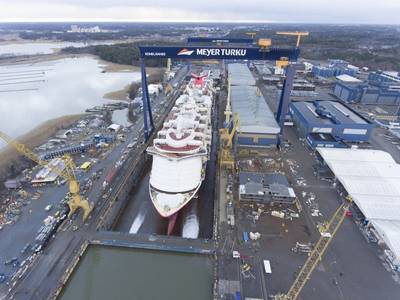 Carnival Cruise Line's next flagship was floated out at Meyer Turku Shipyard in Finland, the builder announced on Friday.

The 180,000-gross-ton, 5,200-passenger cruise ship Mardi Gras will be the largest in the Carnival fleet upon delivery in October 2020.

Ben Clement, Carnival’s senior vice president of newbuilds, says the the “one-of-a-kind” ship is a “game-changer”.

Meyer Turku CEO, Jan Meyer, agrees. “I believe Mardi Gras will be a truly special ship,” Meyer says. “She will be the first to use our now proven liquefied natural gas (LNG) cruise ship propulsion system in North American markets and feature many other sophisticated technologies – including BOLT, the first roller coaster on board a ship.”

With the float-out Mardi Gras' six themed zones are also beginning to take shape with the interior build out of spaces underway, including a new atrium concept with three-deck-high floor-to-ceiling windows and moveable LED screens.

Nearly ,000 specialized companies are engaged in providing materials and complex services to create the cruise ship at Meyer Turku Shipyard.

Meyer reminds that the modern cruise ships are essentially smart floating cities: “We are building all the facilities a smart modern city would have: hospitals, IT-networks, restaurants and sophisticated environmental technologies, on a ship sailing the seas. It is a very difficult undertaking but also the end result is really spectacular.”

The  Mardi Gras was originally scheduled to begin service in August, but delays at the shipyard led Carnival to announce that the newbuild will enter service on November 14, 2020 from Port Canaveral, Fla.