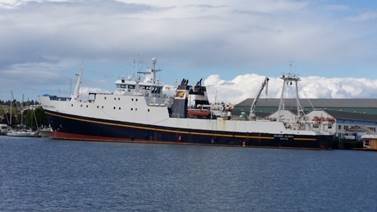 The Fitch Fuel Catalyst improves fuel efficiency by 5-12 percent, reducing pollutants and paying for itself many times over.  According to the manufacturer, Advanced Power Systems Int’l, these benefits are being experienced by many hundreds of commercial ships and vessels operating around the world using its system, including the Golden Alaska and the Tri Marine Group.

Prior to installing the Fitch Fuel Catalyst on its 10 tuna seiners beginning in 2014, Tri Marine’s division in America Samoa commissioned three independent evaluations: a field test on the Cape Hatteras, a dyno test and a load bank test. The group found a 5-8 percent improvement in fuel efficiency versus baseline.

The Golden Alaska, which first started using Fitch in 2014, closely monitors its fuel consumption at all times and reports an increase in fuel efficiency of 8.51 percent when using Fitch Fuel Catalyst to treat fuel.

In addition, there was a reduction in smoke and carbon buildup, which will translate into reduced engine maintenance and unscheduled downtime.