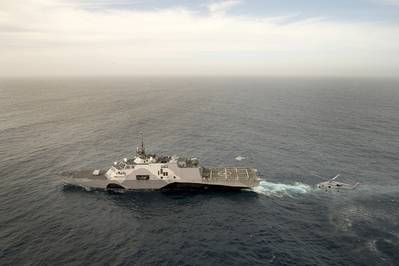 The littoral combat ship USS Freedom (LCS 1) completed Seakeeping and Structural Loads Trials, commonly referred to as Rough Water Trials (RWT) in late March the Navy reported May 21.
The U.S. Navy must demonstrate the seaworthiness and structural integrity of each new ship class. One of the primary ways the Navy verifies these qualities is through a series of at-sea tests and inspections. These are designed to ensure the hull design is able to navigate through and withstand forces due to inclement weather and high sea state conditions.

During the RWT Freedom collected data while operating in sea states 5 and 6 (approximately 8-20 foot waves) off the coast of Oregon for a total of 11 days. The ship was steered in an octagonal route at speeds ranging from dead stop to flank speed to capture data on performance at all speeds and orientations.
The test team collected data to measure stress, torsion, and strain on the ship structure. Over the next few months the data will be further analyzed to compare the actual performance of the LCS class Freedom variant to its modeled performance.

Initial test results are positive, the machinery plant and auxiliaries all performed well, especially in the context of the sustained operations at sea. Once validated, the results will provide the Navy with the conditions (speed and heading variations) under which it should operate the Freedom variant ships in elevated sea states. The ship's crew members were also equipped with accelerometers and sensors to evaluate human factors such as sleep and potential sea sickness due to ship motions.

The ship's crew learned a number of important lessons about operating in elevated sea states, which they will share with other Freedom variant crews. Overall, this trial increased the crew's confidence in operating their ship in rough water.
The LCS class consists of the Freedom variant and Independence variant, each designed and built by different industry teams. The Freedom variant team is led by Lockheed Martin (for the odd-numbered hulls, e.g., LCS 1). The Independence variant team was led by General Dynamics, Bath Iron Works (LCS 2 and LCS 4) and Austal USA (for the subsequent even-numbered hulls). Purchased under the innovative block-buy acquisition strategy, there are 12 ships currently under construction.

LCS is a modular, reconfigurable ship, with three types of mission packages including surface warfare, mine countermeasures, and anti-submarine warfare. The Program Executive Office Littoral Combat Ships (PEO LCS) is responsible for delivering and sustaining littoral mission capabilities to the fleet. Delivering high-quality warfighting assets while balancing affordability and capability is key to supporting the nation's maritime strategy.