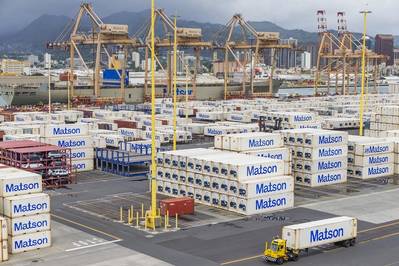 Richard "Rich" Kinney, Vice President, West Coast Terminals and Purchasing, has been promoted to Senior Vice President, Network Operations with additional responsibility for overseeing Matson's deployment of terminal, fleet and equipment assets as well as finance and administration for the company's Operations Division. Kinney will continue to report directly to Ron Forest, President.

"Bal is leading development of our services in Alaska, which has become an important part of Matson's Pacific network and the focus of continuing investment for the long term," said Cox. "A career mariner, Jack has guided Matson's fleet management and operations for the past 27 years, knows our business as well as anyone and is well positioned to oversee our fleet planning and development into the future. Rich's skill set and 22 years in a variety of leadership roles at Matson make him uniquely suited to ensuring the efficient, orchestrated management of operational assets across the enterprise as we continue to grow.

Dreyfus joined Matson in in 1993 as General Manager, Sales – U.S. Mainland and later served in management and executive roles leading area sales and operations in Matson's California and Hawaii locations, including serving as president of Matson Logistics Solutions. Dreyfus holds a Bachelor of Science degree in Business and Economics from the University of San Francisco and is a graduate of the UCLA Executive Program. Having served on the boards of numerous industry associations throughout his career, he currently serves as co-chair of the Port of Alaska Users Group, as a member of the boards of directors of the Marine Exchange of Alaska, Special Olympics Alaska and Covenant House Alaska, and as a member of the Investors Council of the Anchorage Economic Development Corporation.

Sullivan joined Matson in 1993 as Master of MV Moku Pahu and four years later was appointed vessel manager. He later served in executive roles of increasing responsibility in overseeing vessel management, offshore labor relations, fleet planning, vessel engineering and safety, and new ship design and contracting. Sullivan holds a Bachelor of Science degree in Marine Transportation from the United States Merchant Marine Academy at Kings Point, NY. He also holds a Master's license for Steam & Motor Vessels of unlimited tonnage, as well as First Class Harbor Pilot licenses for the Hawaii ports of Kawaihae and Kahului. Sullivan is Chairman of the Board of the National Cargo Bureau and a member of the Council of American Master Mariners and the American Bureau of Shipping. In 2018, Sullivan was appointed to the Marine Transportation System National Advisory Council (MTSNAC) by U.S. Secretary of Transportation Elaine Chao.

Kinney joined Matson in 1998 as a project leader in industrial engineering. He later served in a variety of management positions leading auto operations, intermodal logistics and depot operations, freight operations, equipment procurement and terminal operations across Matson's Pacific network. He holds a Bachelor of Science degree in Industrial Engineering from California Polytechnic State University, San Luis Obispo. Kinney serves as a member of the boards of the Pacific Merchant Shipping Association and Oakland Chamber of Commerce, and as a member of the Coast Steering Committee of the Pacific Maritime Association and the Board of Managers of SSA Terminals, SSAT (Oakland) and SSAT (Seattle).