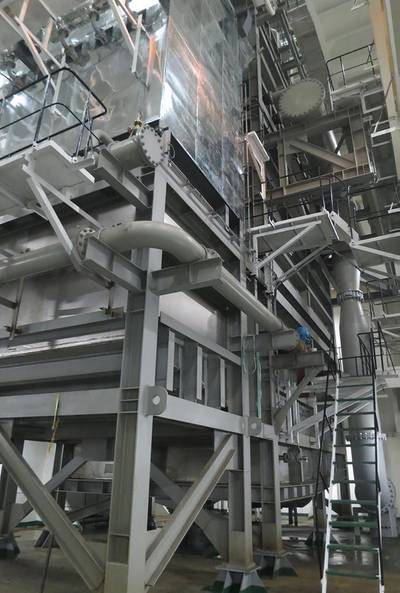 The first 2 units of the scrubber retrofitted onboard ultra-large container ships got approvals from the classification societies, Lloyd's Register and Nippon Kaiji Kyokai, respectively after confirmation of the excellent result of sea trials and consequently also got approvals from the Flag States, Panama and Singapore.

Those 2 ships, whilst continuously using the existing heavy fuel oil, can conform the new SOx emission regulation requirement even after being strengthened as from January 1, 2020 and can reduce environmental impact by removing 97% sulfur content from the exhaust gas, namely realizing the low SOx emission level as same as 0.1%-sulfur-content fuel oil.

DIA-SOx R series which has been installed onboard 20,000TEU and 14,000TEU container ships this time was jointly developed by Mitsubishi Shipbuilding and Mitsubishi Hitachi Power Systems, Ltd. (MHPS).

Its rectangular tower design is the most suitable for ultra-large container ships, and its multi-stream configuration can simultaneously treat with 1 tower exhaust gas discharged from multiple engines, including the large main engine with output over 75,000kW. Moreover, its simplified configuration helps the ship crews to conduct the maintenance work easier.

For the drydock this time of those 2 ships, Mitsubishi Shipbuilding and MHPS jointly dispatched 2 professional teams in parallel to a repair yard located in Zhoushan, China, and completed the commissioning work in 5 days which is much smoother and shorter than originally planned through collaboration with the ship owner, the yard and the classification societies despite of the congested site condition.

Mitsubishi Shipbuilding will continue not only providing marine scrubbers, but also as an engineering company offering superior engineering services for scrubber installation to fully meet customers' needs and requests, regardless whether for retrofitting or newbuildings, for ships built by MHI or others, in order to contribute to the further development of ocean transport, and to reduce the environment load that is increasing on a global scale.