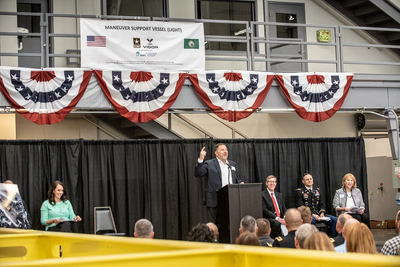 Representatives from the U.S. Army and federal and local elected officials joined Vigor for a keel laying ceremony, celebrating the first milestone in the construction of the Army’s next generation landing craft, the Maneuver Support Vessel (Light) or MSV(L).

The nearly billion dollar contract to build MSV(L) was awarded to Vigor in October, 2017. The new design, developed in partnership with BMT, improves the capabilities of the current LCM-8 and provides the optimal combination of performance, operational flexibility and life-cycle cost while maintaining the reliability and versatility of the Army’s current craft.

The ceremonial welds performed by Congresswoman Jaime Herrera Beutler and COL (P) Helwig marked not only the start of the MSV(L) program but also the beginning of a new era in shipbuilding at Vigor’s recently acquired state-of-the-art all Aluminum Fabrication facility in Vancouver. Vigor expects the site to employ up to 400 workers by 2023 building military craft, workboats and aluminum fast ferries in addition to MSV(L).

Once the SSG Elroy F. Wells is completed and testing and refinements have occurred, the schedule calls for four vessels in the Low Rate Production phase, followed by up to 32 vessels once Full Rate Production is underway. Vigor’s MSV(L) team consists of a number of key partners including BMT, Gladding-Hearn and Northrop Grumman.