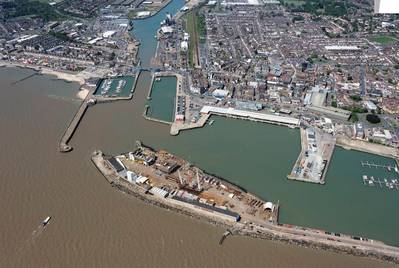 Associated British Ports (ABP), owner and operator of the Port of Lowestoft, has launched a consultation on the Port of Lowestoft Master Plan, a document that sets out ABP’s future vision for growth and development at the port from now until 2036, inviting stakeholders to have their say on the port’s future.

Together with ABP's other two East Anglian ports, King’s Lynn and Ipswich, it contributes £360 million to the UK economy every year, supporting 5,300 jobs nationally.


Coupled with ABP’s ongoing investment in its infrastructure, the Port of Lowestoft’s key location, makes it ideal to service important offshore wind developments off the East Anglian coast.

The port supports construction and operational facilities for developments including the East Anglia One project, which will be the world’s largest offshore wind farm, set to generate over 700MW and power around 630,000 British homes when it begins operation in 2020.

Lowestoft also serves an increasingly important role in the UK’s Oil & Gas and agribulk sectors. Its tenants including Peterson UK Limited, the major logistics and service provider to the offshore energy and oil and gas industries.

ABP Short Sea Ports Director, Andrew Harston, said: “The Port of Lowestoft is a vital component of the local and national economy. Given its significance, and in accordance with government guidance, we believe that it is appropriate to set out our proposals for the future in a comprehensive Master Plan for the port. This document details how the port could develop and what we believe needs to be done between now and 2036 to ensure that the port continues to grow in a sustainable and prosperous way.

“Standing back, one clear message comes out of our Master Plan – that the Port of Lowestoft has a bright future ahead with real development opportunities, not least due to its location directly opposite major continental ports and its excellent links to UK’s transport network.

“ABP has long voiced concerns about the construction of the proposed Lake Lothing Third Crossing which will have a significant negative impact on port operations and marine safety if it crosses the centre of the port. We hope that the bridge promoter, Suffolk County Council, will take on board our concerns about the impact of the proposal on the Port. Whilst we are not against the principle of the Third Crossing, the current proposal will not safeguard the future of the port and the economic prosperity of the region.”

The Lowestoft Master Plan consultation will provide an opportunity to those who are directly connected with the port and those with a wider interest in the economic development of the region to submit feedback.

Once the consultation is complete, ABP will collate all of the comments received and, where appropriate, incorporate them into the Master Plan with the intention of formally adopting it later this year.