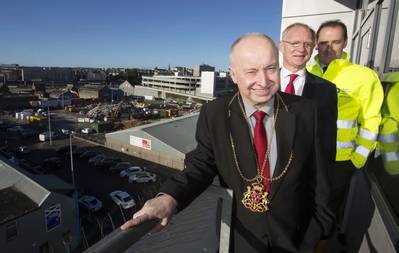 Aberdeen’s Lord Provost yesterday, Tuesday, November 12, gave his seal of approval to what is set to become a new landmark building in the city.

EnQuest’s new HQ will replace the derelict Aberdeen Seafood Park in the city’s harbor area. The company currently employs around 500 people at two locations in Aberdeen, and will occupy the building, which will provide accommodation for up to 800 people when completed in 2015.

Developers Drum Property Group has said the redevelopment of the park will bring considerable economic benefits to a long-neglected city center area. Drum Director Graeme Bone commented, “This development enables EnQuest to relocate to larger, bespoke facilities and will help the company realise its continuing expansion plans. More generally, it will also lead to the physical regeneration of a neglected and rundown area of the city and in addition act as a catalyst in generating additional long term economic activity for the harbor area and the city in general.”

David Heslop, EnQuest’s managing director UKCS said, “This new building clearly demonstrates EnQuest’s long term commitment to Aberdeen and the North Sea and enables us to consolidate our existing workforce under one roof. It also emphasizes the importance of Aberdeen to the future success of EnQuest’s business and the city’s status as our center of operational excellence.”

EnQuest’s commitment to the Northeast was reinforced last month when it announced it was acquiring 50% of the UKCS Greater Kittiwake area (GKA) assets currently owned by Centrica North Sea Oil Limited (Centrica), as well as Centrica’s 100% interest in the Kittiwake oil export pipeline.

The Lord Provost of Aberdeen, George Adam, visited the site today and welcomed progress on the project. He said, “A new North Sea headquarters in Aberdeen for a leading UK independent oil producer such as EnQuest is yet another example of the city’s on-going ability to attract investment. “The building will be a valuable addition to the city center. It will stimulate considerable additional economic activity in the harbor area and the development clearly demonstrates that business is very healthy in Europe’s energy capital.”

The site is bounded by Palmerston Road, Raik Road, Poynernook Road and Stell Road. The proposed internal office area of the building is approximately 120,000 sq ft over eight stories. Associated car parking will be provided on-site in an adjoining building.