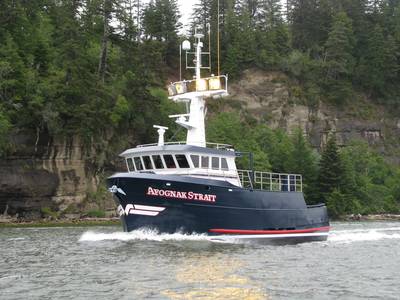 Making it Big With the 58-foot Alaskan Limit

Afognak is the name of an island, and a mountain in the northern part of the Kodiak Archipelago. It is also the name of a passage between little Whale Island and Afognak Island on the shores of which Kevin O’Leary has 143 wilderness acres and a cabin. So when it came to naming their new boat it is the passage, Afognak Straits, that Kevin O’Leary and his vessel partner, Walter Sargent, chose for their new longliner. Delivered by Fred Wahl Marine of Reedsport Oregon this past summer the Afognak Straits is currently, as of September 20, in Dutch Harbor, Alaska.

Typical of the beefy design by Fred Wahl Marine, the 58-foot boat has a 26-foot beam with a 13-foot depth. Prompted by the regulated 58-foot Alaskan limit the beamy boat provides a big stable work platform for the crew. Alaskans have been innovating and building 58-foot limit boats for generations now and the amount of working vessel and crew comfort that can be fitted in the length is really remarkable.

The Afognak Straits has comfortable accommodations for a crew of six. For extended voyages she carries 9,450 gallons of fuel and 1,735 gallons of potable water. There is also a 338-gallon lube oil tank. Propulsion power comes from a Cummins QSK19-M main engine generating 600 hp at 1800 RPM. The main turns into a ZF2450 gear with a 5.5:1 ratio. The gear turns a 5-inch diameter shaft and a four-blade bronze propeller.

Two auxiliaries provide 175kW and 55 kW of electrical power. On deck there is a 26-foot Knuckle crane. The two fishholds are 2210 cu. feet and 1120 cu. feet. To fill those big holds the Afognak Strait is fitted with a Mustad AutoBaiter longline system. The system has been used for halibut and black cod over the summer. In September, O’Leary was in Dutch to change over to cod pot fishing. These are modified Kodiak style crab traps 6.5-feet square by 42-inched deep.

With this combination the Afognak Straits joins a proud heritage of Alaskan limit boats demonstrating innovation and diversity within 58 feet.