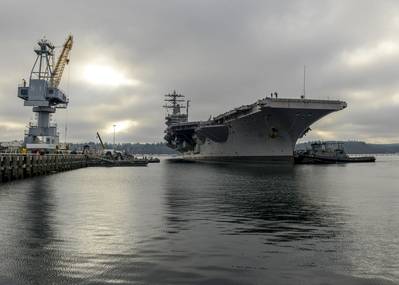 The Consolidated Afloat Network and Enterprise Services (CANES) system's improved security measures are designed to prevent the possibility of classified or secure information being accessed by someone without appropriate clearance, or hardware, the Navy said.
The new system comes with approximately 1,300 new workstations that will also assist Sailors professionally and personally by Sailors being able to conduct research, manage their time through the use of installed software, work on qualifications, and improve morale. Overall, the system will improve the speed of the network and internet access to all hands aboard Nimitz.
The CANES system will consolidate information making it quicker and easier to access, according to Information Systems Technician 2nd Class Jerriod Prosser, help desk supervisor in the automated data processing (ADP) work center.
With the transition to CANES, departments have received CANES-approved Xerox printers. Standardizing the type and brand of the printers will ensure that parts, supplies and consumables will be universally available and provided by Xerox at no cost to departments.
Another step in transitioning to CANES required ADP to switch the ship's network to a temporary local area network (LAN) in February 2015.
According to Information Systems Technician 2nd Class Soyoung Chon, ADP's system administrator, a temporary LAN was necessary to switch over to CANES and all of the cables for the previous system had to be ripped out.
"We ran all new cables," Chon said. "For the first couple of months in the yards that is all we did."
Going through the process of installing CANES, the Sailors in ADP have learned more about the network they are installing.
According to Prosser, the ITs in the department will know more about this network because they were present for the system installation, rather than arriving aboard with the system already in place. This will make them better network administrators.
ADP is also sending Sailors from their department to school to learn more about the CANES system, including how to operate and troubleshoot the system.
"In 'C' school we learned how to make accounts, configure network systems, and use new equipment that we didn't have before," said Information Systems Technician 3rd Class Zachery Rocha, who attended the school last year.
Prosser and Chon both agree going through the install process has helped bring the Sailors in ADP together as a team.
"We do need teamwork, there is no way one person can do it on their own," Chon said.
Nimitz' motto is "Teamwork - A tradition", and like the rest of the maintenance and upgrades Nimitz is receiving, ADP is doing its part to ensure that Nimitz is ready for sea by the end of the extended planned incremental maintenance availability.