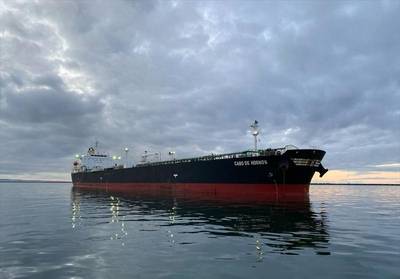 What made Cabo de Hornos’s delivery different was that it was the first time crude oil had arrived in Saint John by ship from Alberta. It came via the Trans Mountain pipeline to the Westbridge Marine Terminal in Burnaby, B.C., and then through the Panama Canal.

By the end of April next year, a second tanker will arrive at Canaport carrying 350,000 to one million barrels of Western Canadian crude oil. In this case, the oil will have come via pipeline from Alberta to a crude oil exporting terminal in Texas or Louisiana.

For most of the Saint John refinery’s 50 years of operation, it has relied on crude oil from sources outside Canada, including Saudi Arabia, the United States, Norway and Nigeria, to meet most of its demand. In 2019, about 80% came from non-Canadian sources, with the remainder from offshore Newfoundland and Labrador by tanker and Western Canada by rail.

Any event — such as a COVID-19 outbreak in any of these oil-supplying countries — that disrupts the flow of crude oil to the refinery threatens the energy security of most people in Atlantic Canada.

Crude oil supply
Relying on non-Canadian suppliers has never been an issue for the refinery. Even during the low points of Canadian-Saudi relations in the summer of 2018 and periods of increased tension in the Middle East, Saudi Arabia has been one of its principal suppliers. (Part of this may be attributable to the fact that about 60% of the refinery’s output is shipped to New England and U.S.-Saudi relations could be affected if Saudi Arabia’s supplies to the Saint John refinery were disrupted.)

However, COVID-19 is a concern for those running the refinery. In April, Irving Oil applied to the Canadian Transportation Agency to use tankers from unspecified, non-Canadian suppliers for these two shipments, as per the requirements of the Coasting Trade Act. In each application it was made clear that the company’s overriding concern was the impact COVID-19 could have on about 80% of its crude oil supply shipped from non-Canadian sources.

This is a legitimate concern.

Globally, the health of ships’ crews has become an increasingly critical issue since the start of the pandemic. In many countries, fear of COVID-19 on ships has stopped shipboard crews from disembarking and returning home to their families, and new crews from boarding ships.

This is forcing shipboard crews to continue working well beyond the end of their contractual period of employment. Reports of mental anguish, self-harm and suicide have also been reported.

Oil consumption in Atlantic Canada
Atlantic Canadians consume about 20% more gasoline per capita than Canadians as a whole. With limited access to natural gas, about 31% of the energy used for space heating in the region comes from heating oil (compared with 5.1% nationally).

Irving Oil’s decision to find alternate ways to access Western Canadian crude oil from British Columbia via the Panama Canal or the U.S. Gulf Coast will undoubtedly increase the diversity of its supply. However, Irving’s concerns over COVID-19 and its international suppliers and shippers are equally applicable to Western Canada’s oilfields and any ships used to carry the crude oil.

To be fair, Irving has few other choices: crude-by-rail is a possibility, but there is limited capacity in its rail yard; TransCanada killed the Energy East project and even if it could be revived, it would take years to complete.

While restructuring Atlantic Canada’s energy system to become less reliant on oil is the obvious answer, there are few short-term solutions. For example, although Churchill Falls could meet part of the region’s energy demand for electricity, heating and transportation, it will not be available until 2041, when the electricity sales contract between Newfoundland and Labrador and Québec comes to an end.

Without access to low-cost electric vehicles and easily accessible charging stations, gasoline will remain the principal fuel of choice for transportation in Atlantic Canada. On the other hand, there are alternatives for space heating, notably electricity and wood, each of which already meet about 30% of the region’s residential demand for heating.

In the meantime, Atlantic Canadians can hope for an effective, widely accepted vaccine and prepare for periodic oil supply disruptions.

The author
Larry Hughes is a professor and founding fellow at the MacEachen Institute for Public Policy and Governance, Dalhousie University.