Teresa Wilkie is an offshore rig market analyst for Bassoe Analytics with 10... 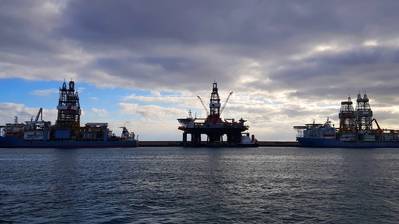 We expected it to happen just not necessarily this soon. But now it’s official, several cold-stacked rigs are about to be reactivated for new jobs in the Golden Triangle, and Valaris is taking the lead. Just last week, the driller confirmed that it will reactivate 6th generation, ultra-deepwater drillship Valaris DS-4 for a minimum 580-day deal with Petrobras Brazil. The rig has been idle for over two years.

This follows other recent announcements from the same rig owner for 7th generation drillships Valaris DS-11, which will also be revived for a long-term deal off Brazil with Petrobras, and Valaris DS-16, which will undertake a two-year deal with OXY in the US Gulf of Mexico starting next year.

Last year the driller took a tough stance on its uncontracted fleet, preservation stacking a hefty 19 rigs (9 floaters and 10 jackups) due to the lack of opportunities in the market. Now it appears to be front of the queue to bring those rigs back out and take advantage of the recovering market.

Meanwhile, Seadrill will reactivate its 7th generation drillship West Jupiter, also for a multi-year deal with Petrobras Brazil, starting in late 2022. Additionally, stacked drillships Auriga and West Carina (both of which haven’t worked in over a year) will also be ramped up and put out to work in 2022 for long-term deals in the USA and Brazil, respectively.

So far, most reactivations have been confirmed for modern, ultra-deepwater drillships due to a rapid increase in competitive utilisation this year, a strong demand outlook for 2022 and 2023 with longer-term campaigns and at higher dayrates.

Additionally, supply in this segment has also plummeted since the last upcycle, according to Esgian Rig Service 44 drillships have been removed from the fleet since 2015. And not to mention the increased cold stacking that took place last year by the bigger rig players.

The drillship market is made up of 58 units currently drilling - as of October 20th - and 11 of the 16 hot/warm stacked assets now have future work in place.

With the pool of ready-to-go drillships shrinking, as shown in Figure 1, could this mean more of the remaining 18 cold stacked units will return to operation? We expect to see reactivations initially for rigs that have been idle for the least amount of time, that have been well maintained and that are still “top tier”, younger assets. 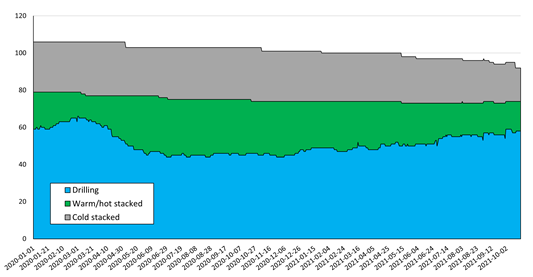 Semisub and jackup utilization have not yet reached levels comparable to drillships and therefore there has been limited rigs confirmed for reactivation on this side, but that doesn’t mean it may not happen further down the line if the market continues its recovery.

Stranded newbuilds are being considered again too, though there is still a preference to reactivate a rig with a proven track record than bringing out a newbuild that has never worked before, not to mention all the additional costs and potential issues that often come along with a newbuild shakedown.

Nevertheless, Saipem has confirmed a bareboat charter of the stranded 7th generation drillship Samsung Santorini, which will be brought out of the yard in South Korea and put to work for Eni in the US Gulf of Mexico next year, and rumors suggest a few other newbuilds are currently under discussion too.

And there are plenty to choose from, with 18 under construction or stranded assets still in yards and just three confirmed for delivery so far.

Valaris says that it will cost in the range of $30 to $45 million to reactivate each of its preservation stacked floaters and that in most cases it expects the initial contract to pay for these costs. Transocean, meanwhile, estimates that the total cash cost of reactivating a cold-stacked asset in its fleet starts at $60 million and could go upwards of $100 million.

Because most drillers will not reactivate unless they can be sure to recuperate costs, it may be that reactivation economics could become an important factor in setting drillship dayrates benchmarks in the coming months, especially if more cold rigs are brought into circulation.

Recent contracts fixed in the Golden Triangle have been as high as $300,000 per day for active rigs, although the majority have been around the mid- $200,000 mark. As can be seen by the estimated examples in Figure 2, ideally a reactivation will be based on receiving a contract on a higher dayrate (somewhere around the $300,000 mark) and a duration of two years or more, but it is still possible to pay back the investment with one or the other assuming rig operating costs of around $120,000 per day.

However, this may not be the case if reactivation costs are closer to Transocean’s estimates than Valaris’, in which case would likely require the $300,000 dayrate plus a multi-year duration to make the reactivation investment worthwhile.

The difference in reactivation costs can vary depending on how the rig has been maintained during its stacked period, but also very importantly, how long it has been idle for. The longer the stacked period, often the higher the cost of reactivation and hence the higher the dayrates must go before its worthwhile investing in putting them in the market.

Competitive drillship utilization has recovered by 17 percentage points since this time last year and is now sitting over 76%. Esgian Rig Service forecasts that this figure will rise above 80% before year-end making its way to the sweet spot of 85% by H1 2022, should all projects move ahead as planned.

Esgian reported in a previous article that idle rigs can pose a threat to recovery if too many are brought back to the market at once, resulting in an oversupply which puts pressure on utilization and dayrates.

Drillers must beware that this optimistic outlook could change quite quickly, and therefore caution must be taken.

However, so far there have been no reactivations on speculation and drillers appear to be sticking to their word about discipline. Rig restorations have only been confirmed for firm, long-term deals and due to the new rebound in deepwater demand the drillship market looks like it can handle the added capacity. For now, at least…

Teresa Wilkie is an offshore rig market analyst for Bassoe Analytics with 10 years of experience tracking the offshore rig and subsea vessel markets.