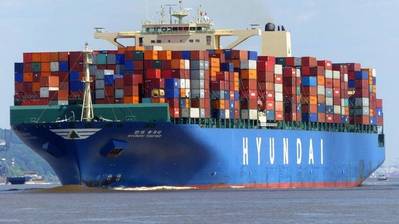 Hyundai Merchant Marine (HMM) is sailing into the THE Alliance. With the new charter deals  it is now “one step closer to becoming a member of THE Alliance”, from which it was excluded when the mega-alliance was announced last month.

According to  a report in Business Korea, HMM president Lee Baek-hoon met with K Line president and CEO Eizo Murakami in Tokyo to discuss the former’s joining the THE Alliance. At the meeting, K Line mentioned that it would approve of Hyundai Merchant Marine’s membership in the THE Alliance sooner or later.
At present, K Line is the only one of the five non-South Korean members of the alliance that is scheduled to be launched next year. Hapag-Lloyd, NYK, MOL and Yang Ming already gave a nod, and Hyundai Merchant Marine can join the alliance once K Line and Hanjin Shipping give their approval.
Korea Development Bank (KDB), HMM’s creditor, said that it would provide “full support” so that HMM could “promptly” join THE Alliance, while it would progress with the debt-for-equity swaps, “to normalise the company’s business as quickly as possible”.
Now HMM’s path into the THE Alliance is not expected to hit any roadblocks as the other alliance members are reportedly in agreement to allow the South Korean shipping line’s entry.
THE Alliance was formed in response to the new Ocean Alliance of China Cosco Shipping, Orient Overseas Container Line, Evergreen Line and CMA CGM.