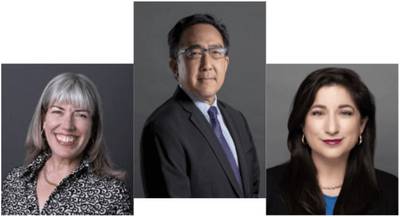 The American Maritime Partnership (AMP), a trade group for the U.S. domestic maritime industry, announced the election of new leadership for the organization. Ku’uhaku Park takes the helm as president, and he is joined by new vice president Jennifer Carpenter, and Sara Fuentes who will serve dual roles as secretary and treasurer. Elected officers will hold their positions for a two-year term.

“I am humbled to have been elected by my peers to lead the American Maritime Partnership and carry this banner at such a consequential time for our industry,” said Ku’uhaku Park, who also serves as Chairman of the AMP Executive Committee. “Our domestic maritime industry is critical for America’s continued economic and national security as well as sustainability efforts such as offshore wind development. I am honored to take on this leadership role on behalf of the 650,000 men and women in America’s maritime workforce.”

Ku’uhaku Park continues to serve as senior vice president of government and community relations at the Matson Navigation Company. Park has extensive experience both in the maritime industry and the broader transportation sector.

“Jennifer and Sara bring energy and fresh perspectives to the AMP leadership team and I will lean on their wealth of knowledge and experience in guiding our organization,” said Park.

Jennifer Carpenter continues in her role at American Waterways Operators as president and CEO while Sara Fuentes continues to serve as Transportation Institute vice president of government affairs.

“It’s a privilege and a passion to advocate for the people of the American maritime industry, who work 24-7 to keep our supply chain moving, our waterways clean and our country safe and secure,” said Carpenter. “I look forward to working alongside Ku’u, Sara, and the AMP Board and membership to serve, strengthen, and grow this vital, all-American industry.”

“Representing the hundreds of thousands of people working in the American maritime industry is an honor,” said Fuentes. “As a maritime nation, America depends on its strong domestic maritime workforce and fleet.  Ku’u, Jennifer, and the AMP membership will continue to champion this critical industry.”