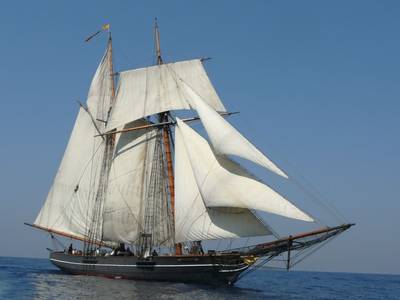 A top draw for some of the hundreds of thousands of visitors to New England's weekend Sailfest was surely the Freedom Schooner Amistad, replica of the United States' most famous slavery vessel, even as many were unaware of the suspense behind its eventual appearance at the annual tall ships gathering.

The original Amistad was the setting for an 1839 mutiny aboard the Spanish slave ship bound for Cuba with 53 kidnapped Africans who were held in a small New Haven, Connecticut jail for a year before President John Quincy Adams convinced the U.S. Supreme Court to release them.

But over the weekend, doubts about whether the Amistad replica, built in 2000, would join the three-day sailing event, which is among the nation's largest with more than 300,000 visitors, stood as a tribute to the original's dramatic past.

An educational group, Amistad America Inc., sailed the ship around the nation for a decade to tell the original's story, but the schooner lost its nonprofit status for failing to pay taxes and fell into other financial difficulties, despite annual state funding of $400,000 as well as $8 million for restoration.

Governor Dannel Malloy had threatened to ax state funding to the group running Amistad if it failed to appear at the weekend festival which included some 200 tall ships, calling such an absence "wholly unacceptable."

In a July 10 letter, Malloy said, "Ensuring that the ship is able to attend Sailfest should be among the most basic fulfillment of the organization's agenda."

By showing up, "the Amistad reminds everyone of an important chapter of our state's history," Malloy said on Saturday.

Free tours of the vessel, which is docked most of the year at a marina in nearby New Haven, will continue through Sunday.