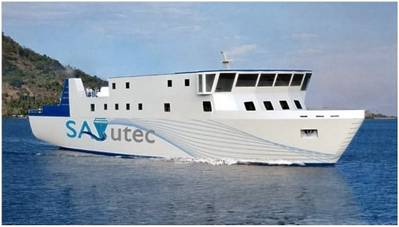 The winners of the Worldwide Ferry Safety Association’s (WFSA) Safe Affordable Ferry Competition, as determined by a panel of judges, have been announced by WFSA Executive Director Dr. Roberta Weisbrod.

The requirements of this year’s competition were to design a safe and affordable RoPax ferry able to transport 185 passengers plus a crew of 15 and cargo carrying vehicles on a route linking five islands surrounding Indonesia’s Savu Sea.
Taking home first place honors is the University of Strathclyde, which will earn a $5,000 prize for its Savutec ferry. The safety aspect has been satisfied by the ferry’s diverse features, such as parametric design which confers to the model a better stability and therefore seakeeping, a general arrangement which improves the stability and evacuation time. Probabilistic damage stability has been calculated to find the weakest points of the ferry which were corrected by the implementation of the new system called Damage Stability Recovery System (DSRS). The DSRS reduces the risk of capsizing and sinking by 191 percent, important in view of fire onboard or grounding inducing ingress of water due to breached hull. Similarly, the team included design of longitudinal bulkheads, and have relocated openings and splash-tight doors, all of which positively increase the safety factor. Moreover, with the implementation of the DSRS, lifeboats are not needed anymore. Only liferafts are considered which make an important cost saving.
First Prize: University of Strathclyde
Team captain: Harold Gardin; Faculty member: Prof. Dracos Vassalos
The vessel was designed with a rounded bilge design as opposed to a chined hull for improved passenger comfort for wave regime. Maneuverability is significantly improved due to the minimal resistance of the optimized hull and the combination of the large rudder area and bow thruster.
Second Prize- 1: Hochschule Bremen - City University of Applied Sciences
Team captain: Heike Lehmkuhl; Faculty member: Prof. Gregor Schellenberger
The team demonstrated consideration of comfort and safety with inclusion of anti-rolling tanks, as well as additional bulkheads to provide greater damage stability. Design included a bulbous bow, redundant propulsion and a passive stabilization system.
Second Prize- 2: Hochschule Bremen - City University of Applied Sciences
Team Captain: Chris Albers; Faculty Advisor Prof. Gregor Schellenberger
The team included a hi-fog water mist system to suppress fires, as well as the use of balancing tanks for heel and list compensation. They included a significant evacuation analysis, as well as important features to protect the environment in case of collision. The team employed a two ramp system for faster loading and discharging.
Third Prize- 1: Tolani Maritime Institute
Team captain: Shalabh Agarwal; Faculty Advisor: Sudhir Sindagi
The team‘s safety features included inflatable fenders and an anti-heeling system. The design went a step further, and rather than considering the predictable practice of overloading, the team devised a way to prevent overloading in the first place. The ferry design features a system that would detect overload conditions and shutdown the engine, making the operation impossible until the violation is corrected.
Third Prize- 2: United States Naval Academy
Team captain: Erik Derecktor; Faculty Advisor: Michael Morabita
The Naval Academy’s design countered the possibility of overloading by designing for seven fold the normal passenger load, with the design far exceeding the latest SOLAS stability codes. Additionally, the Naval Academy design features fire curtain boundaries at the vehicle deck, to prevent spread of fire from one of the most probable places for a fire to occur.
The awards will presented to the winning teams June 2 by Bekir Sitki Ustaoglu, Asia Pacific chief of the IMO Technical Cooperation Division, at the Ferry Safety and Technology Conference being held in downtown New York, June 2-3.
Dr. Weisbrod said, “We are grateful to the support that this Competition, now in its third year, has received from the ferry transport, maritime education and naval architectural communities. Twenty five teams registered and nine actually submitted entries to this challenging competition.”
“Besides the judges and the WFSA Board members for their sage advice and generous time spent on the Competition, I also want to thank the TK Foundation for supporting the ability of students to register and attend this conference, and an anonymous foundation for supporting this organization and underwriting the cash awards,” Dr. Weisbrod continued.