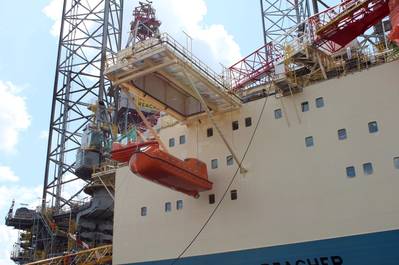 Xervo is a supplier of lifeboat systems to jack-up platforms that meet NORSOK standards. This know-how is now being used to develop safe and cost-effective lifeboat systems for the SOLAS market.

The Danish lifeboat producer Xervo is now announcing a SOLAS version of its popular Boat-In-A-Box lifeboat and rescue boat systems. In recent years the company has had major success with its state-of-the-art lifeboat, developed in co-operation with Maersk Drilling to meet the NORSOK R-002 standard.

The announcement follows the OTC (Offshore Technology Conference) in Houston, where Xervo had meetings with several companies interested in benefitting from the know-how Xervo built up during the development of Boat-In-A-Box.

”We built the company around a clear safety philosophy, which is that a single technical failure must never lead to a dangerous situation.  On that basis, we have had the luck and skill to develop a lifeboat system that we believe is the safest on the market. We won’t compromise that philosophy, but we can use our experience to create a system that meets the SOLAS standards and more. The key players we met at OTC in May were very interested,” says Esben Juul Sørensen, CEO at Xervo.

Uses technology created for the premiere class
Juul Sørensen compared the process with development work in the car industry.  ”Major car producers like BMW and Audi develop technology for Formula One racing cars, and they let that development work influence their consumer vehicles. In the same manner, we can use experience from our NORSOK systems to make a safe lifeboat system for the SOLAS segment,” says Juul Sørensen.

”For us, it’s not about creating a lifeboat system that meets a series of minimum standards. We use a risk-based approach to design for each individual task. We look at the risks that exist in a given project, and together with the customer we set the desired safety level,” says Juul Sørensen.

Positive reception
Xervo is already well into development work on the SOLAS systems, and Juul Sørensen has high expectations for the new system based on conversations he had during OTC.

”The fleet owners were very enthusiastic about our commitment to their employees’ safety, and they can see a major advantage in being able to call on the knowledge we have built up over a number of successful projects. This has lead to a great deal of valuable product optimizations, which means that we can now deliver very safe but still cost-effective solutions to customers.”