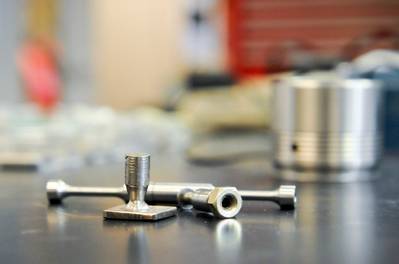 Galfenol is a magnetostrictive smart material that can be used in sensors, actuators and structural supports. The material was co-discovered in 1999 by NSWC Carderock and the Department of Energy's Ames Laboratory and has been in development for the past 13 years in partnership with Etrema Products Inc.
"By itself, iron has the characteristics to be considered a magnetostrictive material, which is material that changes shape when a magnetic field or pressure is applied to it," explained NSWC Carderock senior research scientist, Marilyn Wun-Fogle. "In 1999, we discovered that combining iron with gallium amplifies iron's magnetostrictive capability tenfold. Iron-gallium, or Galfenol, is ductile [capable of being drawn out into wire or thread], stable over a wide temperature range and has energy-harvesting capabilities."

Magnetostrictive materials, such as Galfenol, are of interest to the Navy because they can be used to make actuators and sonar transducers that are used in ships and submarines. Currently, actuators and sonar transducers are made of a material that is more brittle than Galfenol. Galfenol can be used in structural supports for vibrating pieces of machinery such as a generator. As the piece of machinery is running, Galfenol can capture the vibrational energy which can be re-harvested. As a result, less energy is transmitted to the hull of the ship or submarine, which could reduce its acoustic footprint.

"Galfenol can be machined and welded with common metalworking tools which makes it very versatile," continued Wun-Fogle. "Plus, it is magnetostrictively active under tensile stress conditions up to approximately 150 degrees Celsius and to much higher temperatures under compressive stress conditions."
Initially funded by the Office of Naval Research (ONR), the Department of Energy and NSWC Carderock's In-House Laboratory Independent Research Program, continued development of Galfenol is being funded by ONR and the Small Business Innovation Research Program.

"For more than a decade, we have teamed with our partners to design Galfenol as well as develop processes to produce the material in large solid form, rolled sheets, and more recently, wires," said NSWC Carderock's senior research scientist James Restorff. "The wide variety of forms allows Galfenol-based parts to be used in a variety of new applications, both commercial and military."