Argentine Port Workers Plan Another Strike for Next Week 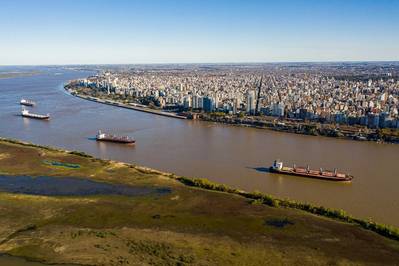 Argentina's grains exports remained paralyzed on Thursday due to a strike by port workers demanding to be vaccinated against COVID-19, with the labor groups threatening another 48-hour work stoppage next week.

Argentina's Port and Maritime Activities chamber told Reuters the strike on Wednesday and Thursday had halted port activity. Industry leaders agree port workers should be protected from COVID-19, but Argentina's vaccination program has had a slow roll-out.

After a meeting with government officials late on Wednesday, the unions issued a statement saying they would "continue the struggle to protect our health and are ready to call a new 48-hour strike starting at 00:00 hours on Wednesday May 26."

Dock workers who prepare ships to sail after being loaded were among those on strike, along with tugboat captains and sailors who guide cargo ships to and from port. In addition, dock-side grains inspectors represented by the powerful Urgara union said on Wednesday they were joining the work stoppage.

Port workers are "essential" to the economy, and thus entitled to be vaccinated, the unions have said.

A spokesman for the health ministry did not respond to a request for comment.

"We as an industry recognize that all employees must be vaccinated. The government is trying to handle the situation as best it can. It is important for the ports to continue operating while coordinating future vaccination programs," said Gustavo Idigoras, head of the CIARA-CEC chamber of export companies.

Argentina is the world's top exporter of soymeal livestock feed, used to fatten hogs and poultry form Europe to Southeast Asia. The South American grains powerhouse is also the world's No. 3 corn supplier and a major wheat exporter.

The strike hits during the high export season as Argentine growers harvest their main cash crops of soybeans and corn. Agriculture is Argentina's main source of export dollars as the country struggles to get out of a three-year recession that has been exacerbated by the COVID-19 pandemic.