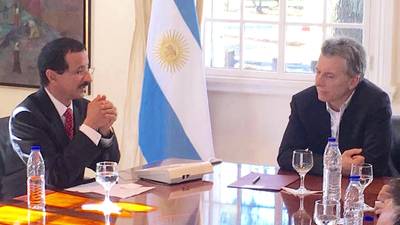 President Macri looked forward to building the partnership with DP World and a greater role for the global trade enabler to serve the Argentinian economy through its investments ports and maritime services. He noted the Group’s plans for future growth following the emergence of South American economies from a period of recession.

Mr Bin Sulayem thanked the government of Argentina for its ongoing support and underlined DP World’s commitment to the growth of the economy. This follows the directives of His Highness Sheikh Mohammed bin Rashid Al Maktoum, Vice President and Prime Minister of the UAE and Ruler of Dubai, to reinforce the UAE’s pioneering role in the advancement of the ports and cruise terminals industry around the world and to enhance global trade.

DP World’s plans to increase its container and cruise business in the Port of Beunos Aires featured in the discussions. DP World Buenos Aires has invested $250 million in the last 20 years and currently operates the Terminales Rio de la Plata (TRP) container terminal with throughput of 600,000 TEUs per year, 37% of the market. The company’s Buenos Aires terminals also provide cruise capacity of more than 300,000 passengers a year.

Mr Bin Sulayem, said, “The discussions with President Macri focused on the development of our business in Argentina. We highlighted our deep commitment to the economy of the country and our faith in the government’s economic policies to nurture the growth of the ports industry. Our strategy is based on always creating capacity ahead of demand and being where our customers want us to be, especially in developing markets.”

Mr Bin Sulayem, Matt Leech and Gustavo Figuerola also met the Mayor of the City of Buenos Aires, Mr Horacio Rodriguez Larreta. They discussed the importance of integrating the activities of the City and the port, especially in the cruise sector and explored opportunities in logistics investments.

TRP is the main terminal in the city and is located in the heart of the downtown area with railway access. It is the largest container terminal in the country, handling general cargo and cruise vessels alongside its container business.

TRP is a joint venture in which DP World owns 55.62%. It features three basins, providing up to five berths for vessel operations and has significant reefer capacity with 1,650 plugs which accommodate the large volume of reefer exports from Argentina. The terminal handles deep-sea vessels from Europe, Asia and North America as well as feeders to both the East and West Coast of South America and barges up river to Rosario.

Non-oil trade between Argentina and Dubai was AED 684 million in 2015.

A new Liebherr LHM 600 Mobile Harbor Crane has been in operation in the Port of New York and New Jersey since November 2019.