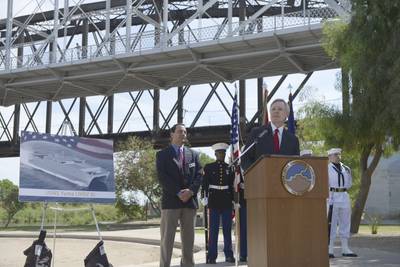 Secretary of the Navy Ray Mabus attended a ship naming ceremony for the future joint high-speed vessel (JHSV) 'USNS Yuma' (JHSV 8) in Yuma's Gateway Park. Mabus chose the name 'Yuma' as a tribute to the residents of the Arizona city and their close ties with the military.

Speaking to a crowd that included Yuma's Mayor Douglas Nicholls, Mabus explained what the future may hold for JHSV 8.

"The ships we build today will be a part of fleet for more than three decades. Sailors not yet born will serve in her," he said. "With her ability to operate in areas that might be otherwise inaccessible, USNS Yuma may well be the only part of America, and her Sailors the only Americans, some people in the world will ever see.

"  The future USNS Yuma will be built on a catamaran hull that can operate in shallow waterways. It will feature a flight deck able to support day and night helicopter and unmanned aircraft operations.

JHSVs also have, according to Mabus, "a whole lot of space inside," an important aspect of future operations.   "That space is what makes these ships so important for our future," he said. "It gives our Marines and Sailors an opportunity to come up with new and innovative ways of operating. These ships will carry Marines across the vast Pacific, operating with our partners and helping to build up our allies."

JHSVs will also deploy to the Caribbean and South and Central America as well as work with Special Operations forces among other missions.  Mabus concluded his remarks at the ceremony by thanking the city for hosting the event and sharing its name with the Department of the Navy.