OSV Assisted by EUNAVFOR Warship in Gulf of Aden 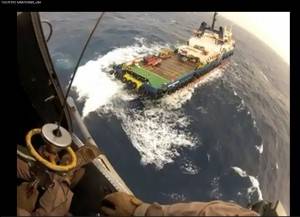 The entire operation lasted in excess of 24 hours and was conducted mainly with the use of Scirocco’s helicopter and its crew which initially provided the disabled vessel's crew with portable radios to maintain contact with the ship, as well as with emergency lights.

At first light on July 5, Scirocco’s helicopter brought drained batteries from the ship on board the Scirocco where they were recharged. With full batteries the vessel’s crew was able to restart the power generators and, later on, the main engines.

During the operation, Scirocco ensured the safety of the vessel by keeping a close guard and warning all transiting ships of its presence. This was a crucial contribution to the navigational safety in the Gulf of Aden especially at night time with poor visibility and in the prevailing monsoon rough sea conditions.