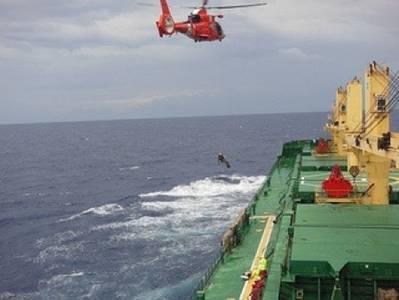 The Cutter Vigorous rendezvoused with AS Vincentia 200 nautical miles north of Puerto Rico where the crew of the MH-65 helicopter safely hoisted the Canadian national off the AS Vincentia and took him to the cutter Vigorous to receive medical attention.

Due to significant distance off-shore and lack of any nearby rescue assets, Coast Guard coordinators first communicated with nearby Bahamian-flagged 518-foot motor vessel Chiquita Scandinavia through AMVER to provide assistance. Upon arriving on scene, the Chiquita Scandinavia reported rough and hazardous sea conditions and were unable to carry out the evaccuation. Subsequently the AS Vincentia arrived on scene and succeeded.