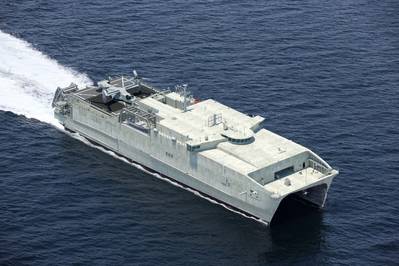 Austal USA has won a $230.5 million contract for the detailed design and construction of EPF 16, the Navy’s newest Expeditionary Fast Transport (EPF) ship.

"EPFs have demonstrated their operational capability to conduct a variety of missions to include humanitarian assistance, disaster relief, maritime security, surveillance, command and control, and counter-narcotic missions around the globe. The inherent versatility of the EPF design allows for its mission to be tailored to the needs of each fleet and combatant commander’s geographic command," Austal said.

"Like the previously delivered EPFs, EPF 16 will benefit from the serial production of this program, resulting not only in a world-class ship but also providing assurance to the U.S. Navy that capability will be delivered on budget and on schedule,” said Austal USA President Rusty Murdaugh. “Our reputation for delivering quality is a direct reflection of the commitment and dedication of our talented shipbuilders and suppliers.”

EPF 16 will be the third ship constructed in the Flight II configuration.

Construction of the EPF 16 is expected to start later this year with delivery projected for 2025.