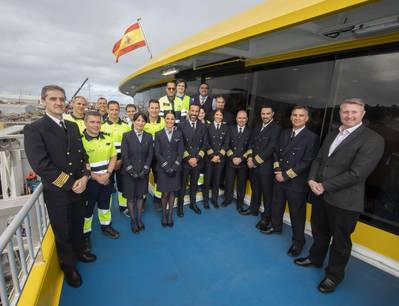 The high-speed trimaran ferry Bajamar Express is the first of two identical vessels ordered by Fred. Olsen Express in a €126 million ($142.8 million) contract in October 2017. The second vessel, Bañaderos Express, is under construction at Austal Philippines shipyard in Balamban, Cebu, and is scheduled for delivery in the first half of 2021.

Capable of transporting 1,100 passengers and 276 cars at a cruising speed of more than 37 knots, the new trimaran ferries for Fred. Olsen Express feature multiple bars, kiosks, a retail shop and children’s play area.

During sea trials, Bajamar Express was able to reach trial speeds in excess of 44 knots while maintaining superior passenger comfort, which the builder credits in part to its MOTION CONTROL System and new MARINELINK-Smart technology that provides real-time analysis of vessel performance, on board and remotely.

Fred. Olsen S.A. CEO Andrés Marín said the Bajamar Express was eagerly awaited in the Canary Islands, where the ship will commence operations between Santa Cruz, Tenerife and Agaete, Gran Canaria, immediately upon arrival in August 2020.

Speaking at the delivery ceremony at the builder’s shipyard in Henderson, Western Australia, Austal Chief Operating Officer Patrick Gregg said the Bajamar Express was the second trimaran to be delivered to Fred. Olsen Express and the fourth Austal vessel to join the Fred. Olsen fleet.

“Fred. Olsen Express recognized the enormous potential of the trimaran hull form for high-speed craft and engaged Austal to develop the original and still the largest trimaran ferry operating in the world, the 127-meter Benchijigua Express.

“Fred. Olsen Express ordered two more trimarans in 2017, and today we celebrate the first of these vessels to be delivered,” Gregg said.