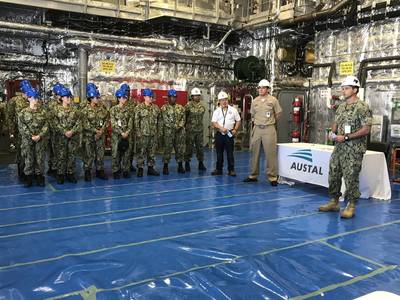 The future USS Charleston (LCS 18) delivered to today will be the 16th littoral combat ship (LCS) to enter the U.S. Navy fleet.

The Independence-variant LCS is the ninth delivered by Austal USA, the American branch of Australian shipbuilder Austal, and the third LCS delivered by the Alabama shipyard this year.

Five LCS remain under construction at Austal’s Alabama shipyard. Cincinnati (LCS 20) is preparing for sea trials. Assembly is underway on Kansas City (LCS 22) and Oakland (LCS 24) and modules for Mobile (LCS 26) and Savannah (LCS 28) are under construction. Construction on Canberra (LCS 30) is scheduled to begin in early 2019.

Austal is also under contract to build 12 Expeditionary Fast Transport vessels (EPF) for the U.S. Navy. The company has delivered nine EPFs while an additional three are in various stages of construction.