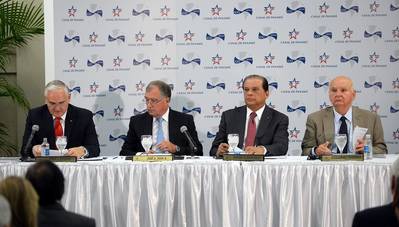 The new structure will apply to the existing Canal, as well as to the planned new lane of traffic that will be added when the expansion begins operation in 2016. The new locks will allow shipping lines to transit the Canal with larger ships, providing greater economies of scale. The expansion will also open new global shipping routes and allow the transit of non-traditional commodities through the waterway, such as Liquefied Natural Gas (LNG).

"The public hearing is a very important step in this process. ,” said ACP Administrator/CEO Jorge L. Quijano. "We want to ensure that the new toll structure is appropriately informed by all interested parties and that once approved, it is reflective of the Canal’s value and our efforts to continually improve its service responsiveness while charging a fair market price."

Comments made during the hearing, as well as those shared with the ACP in writing, will be analyzed and taken into consideration before submitting a final proposal for approval by the Canal Board of Directors and the Cabinet Council.

Upon final approval, the adjustments – for all market segments, except for the new Intra Maritime Cluster Segment – are scheduled to begin in April of 2016.