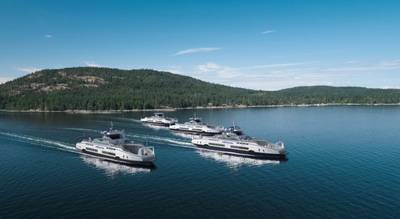 The ferry corporation announced that Damen Shipyards Group of the Netherlands has been awarded the contract to build the new vessels.

Project cost for the four latest Island-class vessels is about $200 million, including financing and project-management.

According to a release, BC Ferries’ procurement process resulted in 18 bids from international shipyards, with a shortlist of nine shipyards invited to participate in the detailed bidding process. No Canadian shipyards expressed interest in competing for the contract.

With the extension of the partnership between BC Ferries and Damen now confirmed, Damen will extend its agreement with Point Hope Shipyards of Victoria, B.C. to provide technical and warranty support for the new vessels with their local staff.

“These next four Island Class ships are a major step in our plan to progressively lower emissions across the fleet and be a leader in the energy transition to a lower carbon future,” Marshall added.

The Island Class is a battery-powered ferry. When electric charging technology matures to make electricity available in the quantities required, BC Ferries will operate these new ships as all-electric ferries, using clean energy. In the interim, these ships will use an on board low sulfur diesel hybrid system.

The agreement with Damen is a design-build, fixed-priced contract that provides BC Ferries with substantial guarantees related to delivery dates, performance criteria, cost certainty and quality construction.

The third and fourth new vessels will service the Campbell River – Quadra Island route and the fifth and sixth new ships will serve the Nanaimo Harbour – Gabriola Island route by 2022.

By replacing one larger ship with two smaller vessels on each of these routes, customers will receive more frequent service, increased passenger capacity per hour, reduced vehicle line-ups, improved safety and reduced congestion on local roads. It also eliminates the need to consume more green-space to increase the size of terminal holding compounds by moving more traffic through the same amount of space.