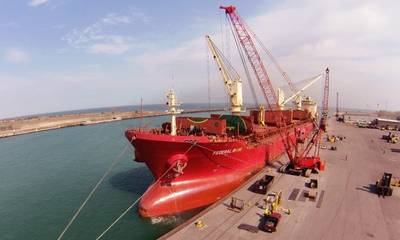 While U.S. ports have been busy, overall the beginning of the shipping season has been slower than anticipated.
“Although the overall cargo numbers remain down when compared to the same time frame last year, in June we were above the five-year average,” said Betty Sutton, Administrator of the Saint Lawrence Seaway Development Corporation.  “Imports arriving in the Great Lakes Seaway System kept longshoremen busy during the month of June.  About 45 ships arrived from 19 different countries with high value cargo like windmill components, machinery, aluminum ingots, steel, sugar, and general cargo.  Prior to leaving the System, vessels loaded export cargos that consisted of wheat, corn, soybeans, potash and general cargo loaded in containers.”
“New shipments of intermodal cranes helped drive June’s maritime port cargo numbers above the same period last year,” said Port of Indiana-Burns Harbor Port Director Rick Heimann. “We’ve had multiple large cranes and containers of crane components arrive by ship from Europe that will be used to handle containers in multiple intermodal yards around the Midwest. June cargo volumes were also helped by new outbound shipments of recycled rubber and strong volumes of bulk commodities for use in the steel-making process by ArcelorMittal.”
“Both steel and agricultural products continued to move at a strong pace through the Port of Milwaukee in June,” said Paul Vornholt, port director of the Port of Milwaukee. “Additionally, the Port has just completed reconstruction and upgrades on two Class 1 rail lines serving port tenants and terminals. In partnership with the Wisconsin Department of Transportation, the Port invested nearly $3 million on this project which will maximize our multi-modal connections and make it easier for our customers to move their products through the Seaway.”
“In June, the Port of Oswego received one shipment of aluminum totaling 10,500 metric tons,” said Zelko Kirincich, executive director and CEO. It was delivered by a McKeil Marine barge bound for the Novelis plant for use in the automotive sector. “We expect to see more activity at the Port in July and August,” added Kirincich.
The St. Lawrence Seaway reported that year-to-date cargo shipments for the period March 21 to June 30 were 9.9 million metric tons, down 7.69 percent over the same period in 2015.  The dry bulk category was down nearly 8 percent but cement, potash and scrap metal were in the positive column at 10, 28, and 88 percent respectively. Iron ore was down 18 percent; coal was down almost 17 percent. While the general cargo category was down 8 percent, steel was up 108 percent and other general cargo was up 131 percent.