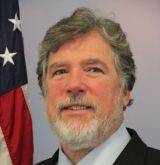 New leadership for BOEM’s Office of Renewable Energy Programs
The Bureau of Ocean Energy Management (BOEM) Director Abigail Ross Hopper announced James (Jim) F. Bennett as BOEM’s new Chief for the Office of Renewable Energy Programs (OREP), the program responsible for overseeing offshore renewable energy development on the Outer Continental Shelf.
Bennett has 35 years of Federal service and has served in a variety of capacities around the Department of the Interior and the Bureau. Most recently, he served as the Chief of the Division of Environmental Assessment overseeing BOEM’s compliance with the National Environmental Policy Act and other environmental laws focusing on the Federal Outer Continental Shelf programs, including oil and gas, sand and gravel, and renewable energy. He is a graduate of the Departmental Manager Development Program and has earned two Master’s degrees, one in Environmental Planning from the University of Virginia and the other in Computer Systems Management from the University of Maryland.