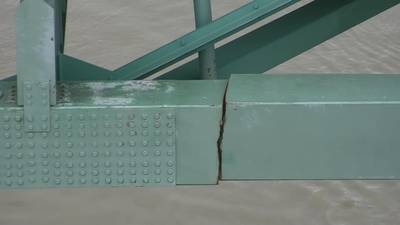 Earlier this month, a significant crack discovered on the Hernando DeSoto Bridge brought Mississippi River traffic to a halt near Memphis, freezing more than 60 vessels and 1,000 barges. (Photo: Tennessee Department of Transportation)

The White House said on Friday it had pared down its infrastructure bill to $1.7 trillion from $2.25 trillion, with cuts to investments in broadband as well as roads and bridges, in an effort to find common ground with Republican lawmakers.

The effort represented a desire by President Joe Biden's team to engage with the opposition party on an issue that the Democratic president has made a priority in his early days in office.

But the two sides still remained far apart, and one person familiar with the matter said Senate Republicans did not view the new proposal as a significant improvement on Biden's original ask.

"This proposal exhibits a willingness to come down in size, giving on some areas that are important to the president ... while also staying firm in areas that are most vital to rebuilding our infrastructure and industries of the future," White House spokeswoman Jen Psaki told reporters.

Some aspects that had been removed from the new proposal, such as investments in research and development, would find their way into other bills, she said

A White House memo showed Biden's new proposal would reduce spending on broadband to $65 billion. Spending on roads, bridges and major infrastructure projects would drop to $120 billion, down from Biden's initial proposal of $159 billion but well above Republicans' desired $48 billion.

Psaki said that because the overall cost of the package had come down, the need for "pay-fors" would also be reduced. Biden remained committed to not raising taxes on people making less than $400,000 a year, she said.

The White House plan, which Republicans have decried as too expensive, would seek to address climate change and social issues such as elder care, in addition to revitalizing traditional transportation infrastructure.

It would cover the cost of the investments by raising taxes on U.S. corporations and wealthy Americans. Top Republican lawmakers have said they would not agree to a tax hike.