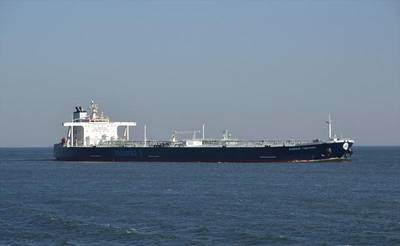 An oil spill off Russia's Black Sea coast over the weekend spread over an area of nearly 80 square kilometers and was much larger than initially thought, scientists at Russia's Academy of Sciences (RAN) said on Wednesday citing satellite imaging.

A leak occurred as the Greek-flagged Minerva Symphony tanker took on oil at the Yuzhno-Ozereyevka sea terminal near Novorossiysk in southern Russia, the Caspian Pipeline Consortium that owns the terminal said on Monday.

The consortium, which transports oil from Kazakhstan, said on Monday the spill had spread over 200 square meters and involved 12 cubic meters of oil. It said the spill was quickly contained and posed no threat to people or wildlife.

But on Wednesday, RAN's space research institute said a satellite image taken on Sunday and studied by two RAN scientists showed the leak had covered a much bigger area.

"According to their calculations ... the area of oil pollution at the time of the radar image reached almost 80 square kilometers," it said in a statement on its website.

"The oil slick stretched from the shore into the open sea over a distance of 19 kilometers on August 8," it said.

The CPC consortium did not immediately respond to a request for comment.

Deputy Prime Minister Viktoria Abramchenko ordered the state environmental watchdog to assess the scale and impact of the spill.

(Reporting by Tom Balmforth and by Olesya Astakhova; editing by Elaine Hardcastle)