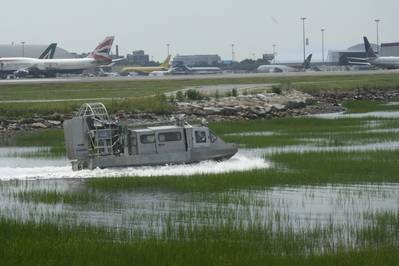 The new 8' x 20' MMCP boat will be used for Search and Rescue as well as for Airport/Port Security.

According to Midwest Rescue their MMCP provides access to areas inaccessible to the fire department until now!

Midwest Rescue Airboats also manufacture ice rescue airboats built to withstand ice and extreme harsh environments without the need of additional internal structure. They do not use T-bars and  were the first to use "patent-pending" interlocking pyramidal grid system in airboats. Where other manufactures have used canvas tops. They also say they were the first manufacture to build heated aluminum cabins with roll-over protection and their completely sealed aluminum hulls with bulkheads not only provides buoyancy, but protection from "swamping".