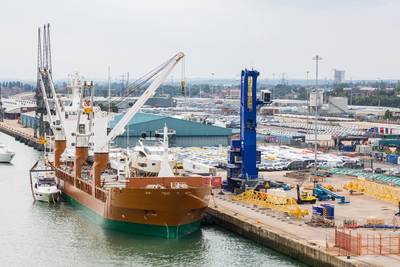 British ports can apply for funding under a new UK government scheme to support infrastructure changes they may need to make in the event of a 'no-deal' Brexit. (Photo: © Adobe Stock / dbvirago)

The British Ports Association has welcomed the announcement by the UK Government that there will be a new grants scheme for infrastructure modification at UK ports should there be a ‘no-deal’ Brexit but has stated a deal was the best way to avoid potential disruption at ports.

The UK’s Department for Transport is to introduce its £10 million (about $12.17 million) Port Infrastructure Resilience and Connectivity Fund for English Ports scheme in the run up to the Brexit date of October 31 which will allow ports to bid for grants of up to £1 million ($1.2 million) each for infrastructure improvements to help prepare for the potential new processes and possible congestion that could arise in the event of a ‘no deal’ Brexit.

Richard Ballantyne, chief executive of the British Ports Association Chief Executive, said of the funding scheme: “We welcome this new funding for ports which a number of operators will apply for to help prepare for Brexit. British ports have been working closely with the UK Government for the past three years on a range of Brexit scenarios. The industry is as ready as it can be for a ‘no deal’ although it is clear that this is about mitigating disruption at certain ports, not avoiding it.

“The potential challenges are not only for the likes of Dover but also other ports such as Holyhead, Immingham and Portsmouth that handle a mix of driven and unaccompanied vehicle freight between the UK and the EU, which currently flows through ports swiftly. There could also be wider issues for other ports which will rely on the HMRC’s [the UK’s customs authority] systems to handle a huge increase in customs data.

“Ports are of course though only one part, albeit an important component, of the logistics chain. We rely on others – freight forwarders, hauliers, agents, Government agencies – to also be ready for what is an unprecedented level of change potentially coming in with little or no notice.

“A ‘no deal’ would certainly appear to be more of a possibility now and it is prudent to plan for this potential outcome. However, while we are not a political organization we remain firmly of the view that a deal that supports frictionless, free-flowing frontiers is the best outcome and as far as we are aware this is still the Government’s aim. We still hope that the UK and EU can come to a sensible arrangement ahead of the deadline,” Ballantyne concluded.

The new funding follows the Department for Transport’s previously announced Freight Capacity Framework initiative which is aimed at shipping and ferry operators and securing category one goods such as medicines while in a separate development the UK Government has announced money for local government in the run-up to October 31, 2019.