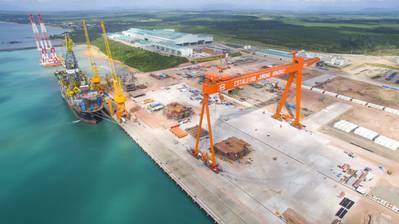 Singaporean rig builder Sembcorp Marine said on Wednesday that authorities had searched its shipyard in Brazil as part of a graft investigation, sending its shares lower and underlining the staying power of Brazil's ongoing "Car Wash" corruption probe.

In a separate statement, federal prosecutors in Brazil said they arrested Esteves de Jesus, noting there were "strong indications" he transferred $9 million to Choon as part of a wide-ranging scheme in which Sembcorp paid bribes to state-run oil firm Petroleo Brasileiro SA, or Petrobras, in turn for contracts.

Reuters was not immediately able to contact Esteves de Jesus or Choon for comment. An attorney listed as Esteves de Jesus' lawyer did not answer a phone call from Reuters.

Sembcorp Marine said it was cooperating fully with federal police in Brazil and has provided "materials within the scope of the warrant."

"In files obtained from Esteves' electronic devices, there are references to dividing with Choon profits that originated from rig contracts signed" with Petrobras, prosecutors said, adding that Choon "benefited directly by receiving kickbacks."

The probe comes as Sembcorp Marine is already struggling with falling profits due to a downturn in the global offshore and marine industry.

The search is part of Brazil's wide-ranging Car Wash investigation, which was launched in 2014. As one of the largest corporate corruption probes in history, Car Wash has already taken down scores of politicians and businessmen in Brazil and across Latin America who were once thought untouchable.

Sembcorp Marine's shares slid 8.44 percent in Singapore on Wednesday - their biggest daily drop in 1-1/2 years - while Sembcorp Industries fell 2.8% before paring some losses, to close down 2.43%. The broader market was down 0.09%.

Sembcorp Marine could also use some of that loan to pay off any potential fines, said Joel Ng, an analyst with KGI Securities.