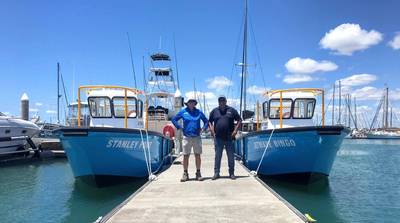 “With a three-stick manual control system, (throttle, gear and bucket controls), maneuverability of these is about the best of any I’ve built,” Hough said. “Once you get used to it, they are super-responsive – they are as good, if not better, than any other setup you can power this kind of boat with, in my opinion.”

“BtB Marine has always come from a philosophy of looking at innovative ways to build and operate ecologically sustainable vessels,” Hough said. “Safety, reliability and practicality are paramount issues for vessels in remote locations. Our vessels have been performing remarkably for many years in many locations around Australia and right throughout the Pacific Island Nations”.

BtB Marine built the twin line handling boats in Hervey Bay for Jetwave Marine in Western Australia, where their port support duties will include line handling and dive operations in Fremantle & Port Headland.