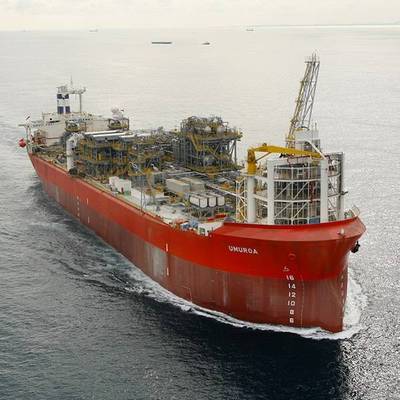 FPSO operator BW Offshore has reached a settlement with the New Zealand government over the FPSO Umuroa, which has been stuck at the Tui field, around 50 kilometers off the coast of Taranaki, for months.

BW Offshore has been unable to remove its FPSO from the Tui field following the contract termination, client liquidation, and the country's court and environment regulator intervention.

Client Tamarind Taranaki in October 2019 said it wouldn't extend the FPSO contract after December 31, 2019, and went into insolvency in December 2019, without any funding secured for decommissioning and abandonment liabilities.

BW Offshore then said it would disconnect and demobilize the FPSO, expecting - at the time - to disconnect from the field and sail away to Singapore by the end of March.

Before removing the vessel, BW Offshore needed to disconnect it from Tamarind's equipment on the seafloor, and the country's environment protection regulators then asked for all of this subsea equipment removed as well, something which is, per BW, the responsibility of Tamarind, which is in liquidation, and thus unable to remove the subsea equipment.

The conundrum has kept the FPSO in place for months, with BW Offshore's subsidiary BW Umuroa incurring the costs for maintaining the FPSO on location and in compliance with regulatory requirements. This has included full remuneration of the local crew and payments to suppliers.

After months of waiting for a solution, BW last month said it would liquidate the subsidiary operating the FPSO to stop the cash burn, and hand over the asset to liquidators.

Announcing the liquidation decision, BW Offshore said last month it had incurred more than $21 million in 2020 alone to keep the FPSO on-site and in compliance with regulatory requirements during the period, including demobilization costs for the earlier attempt to disconnect the vessel.

However, almost a month later, BW Offshore said it had on November 18, signed an agreement with the New Zealand government, through the Ministry of Business, Innovation, and Employment (MBIE), which will cover costs for continued safe operations of the FPSO Umuroa until such time when the unit is disconnected from the Tui oil field.

"Subject to prevailing Covid-19 restrictions, the disconnection is expected to be completed before the second half of 2021. As a result, the company has ceased the previously announced voluntary liquidation of BW Umuroa Pte. Ltd, a subsidiary of BW Offshore and the owner of the FPSO Umuroa," BW Offshore said.

In a separate statement, on Friday, MBIE said that the agreement with BW Offshore would allow the first phase of the decommissioning of the Tui Oil Field to start, which will see the FPSO Umuroa disconnect from the oil field and depart.

“Under the agreement, MBIE will reimburse BWU for actual costs associated with the demobilization. The work is expected to be completed during summer 2020/2021,  Chris Bunny, Deputy Chief Executive, Building, Resources and Markets said.

MBIE is responsible for the decommissioning of the Tui Oil Field after the liquidation and receivership of Tamarind Taranaki Ltd.

A dedicated Tui Project team, within MBIE’s Energy and Resources Markets branch, is planning and preparing for the subsequent phases of full decommissioning of the Tui Oil Field.

Russia's Nord Stream 2 said on Saturday it planned to resume pipe-laying work on a 2.6 kilometer (1.62 mile) stretch of the…