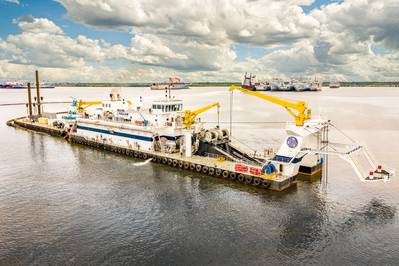 Located northeast of Venice, La., the restoration project includes dredging 5.7 million cubic yards of material in order to restore the barrier shoreline through beach, dune, and marsh fill placement. It will utilize an offshore sand source located just a few miles away in the Gulf of Mexico.

Callan Marine will deploy the General MacArthur, Callan's new 32” cutter suction dredge, to complete this work. At 290 feet in length and a nine-foot draft, the General MacArthur boasts 24,000 total installed horsepower. Powered by 3 Cat-MAK diesel engines, the dredge has a fuel capacity of over 300,000 gallons, giving the MacArthur the ability to perform work on all U.S. coasts and waterways, as well as globally.

The estimated completion for this restoration project is spring of 2021.

Breton NWR provides breeding habitat for both colonies of nesting wading birds and seabirds, as well as a wintering habitat for shorebirds and waterfowl. Twenty-three species of seabirds and shorebirds frequent the Refuge. Additionally, thirteen species, including brown pelicans, use these islands for nesting purposes.