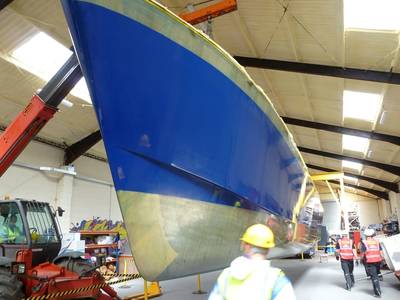 The first of the hulls of the PLA’s new survey vessel is removed from the mould at CTruk’s Essex yard (Photo: CTruk)

The hull structures for the Port of London Authority’s (PLA) new 17-meter survey catamaran have been completed by shipbuilder CTruk.

The two composite hulls were removed from the mold after several weeks of lay-up work and are now undergoing first stage fit out with fuel tank and ballast tank bulkheads at the builder’s River Colne facility in Colchester, while the deck is molded at its Brightlingsea facility. The next stage will see the deck fitted to the hulls before the wheelhouse is added.
Production manager Sebastian Shillaker said, “The build is progressing well, and we released both hulls on the same day. We are now busy working on the deck, and the mould has been prepared for the wheelhouse as we continue towards hand-over before year end.”
The CTruk vessel has a low draught for shallow water access and a low air draught so it can get under Thames bridges with ease. The boat can accommodate up to 12 people (two crew and 10 passengers) and is water jet propelled for low draught.

Italian shipbuilder Fincantieri has floated out the Viking Saturn, the latest cruise ship Fincantieri is building for the shipowner Viking…