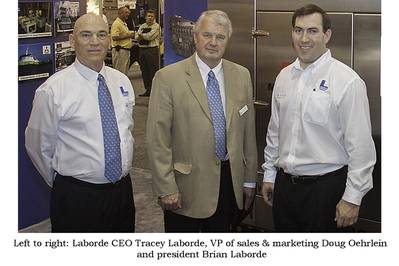 Laborde Products of Covington, Louisiana, observes sixteen years in business in 2014. During this time, the company has expanded both its product line and staff, as well as its reach throughout much of the Gulf Coast area.

Growth has brought changes to Laborde's staff. Stepping down as president, Tracey Laborde remains company CEO. Brian Laborde now fills the role of president, with Doug Oehrlein as VP of sales and marketing. More diesel technicians and a new service manager augment the company's dedicated service department. Laborde has also increased its sales force at all three company locations in Louisiana and Texas.

"It has been great fun being a part of taking a little company with about 15 employees with the biggest engine being 240 hp and growing it to the point where we have three branches and revenues that are more than six times what they were back in 1998," said Doug Oehrlein, Laborde's VP of sales and marketing. "When we started this, we weren't the best or the biggest at anything. Now, we are the largest Mitsubishi distributor in North America. We have made Mitsubishi the fastest growing engine brand in the Gulf Coast and we have successfully competed with big names. We have aggressive new leadership and the strong support of the old guard, so I am very excited about the future."

Since 1998, Laborde Products has provided diesel-powered generators, pump packages, pressure washers and other equipment. The family-owned company carries Mitsubishi, Yanmar, FPT and Hatz engines for the marine and industrial market segments. Additionally, Laborde manufactures pumps and generators under its own brand, Diesel America.