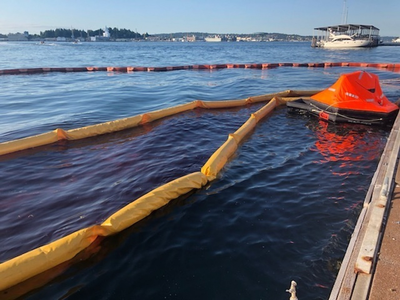 Coast Guard pollution responders are responding to a report of a tug that sank at the Port Orchard Railway Marina in Port Townsend, Washington, Monday.

Members from Coast Guard Sector Puget Sound's Incident Management Division are on scene overseeing the removal and containment of fuel discharged from the 65-foot tug Meagan M. The vessel is currently registered as a towing vessel; however the master claims it has been used in a strictly recreational capacity for the past two years.  Divers and technicians have recovered approximately 250 gallons of red dye diesel fuel and hydraulic oil.

The Oil Spill Liability and Trust Fund has been opened for $100,000. Global Salvage and Diving has been contracted to remove the pollution from the vessel and has deployed hard boom and sorbents to prevent further pollution potential. Cleanup crews have removed the remainder of fuel from the vessel and closed all vents.

The vessel sinking reportedly caused a dock to overturn that resulted in damage to a nearby vessel.

The Coast Guard is working closely with the Navy, the National Oceanic and Atmospheric Administration, Washington State Department of Ecology and local contractors to protect the environment and mitigate potential impacts from pollution.