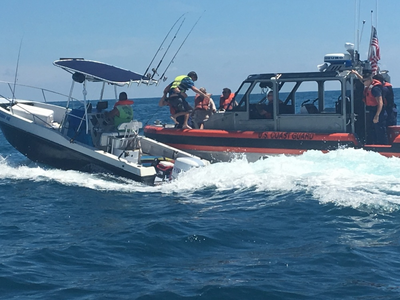 The Coast Guard arrived on scene, removed three people and dewatered the vessel.

Coast Guard watchstanders received a report from a man aboard the 21-foot center console at 2:36 p.m., stating they were taking on water and were in need of immediate assistance.

Coast Guard Sector St. Petersburg watchstanders dispatched a Coast Guard Station Cortez 29-foot Response Boat— Medium crew to respond.
The crew arrived on scene, removed three of the people aboard and embarked two Coast Guard boatcrewmen and a dewatering pump. The crewmen began dewatering the boat while the captain of the vessel made way to Coquina boat ramp where the vessel was trailered.

“These mariners did everything right,” said Petty Officer 2nd Class Jacob Lettington, the Coast Guard coxswain on the case. “They notified us immediately of their position and nature of distress, so we were able to locate them quickly and provide them with the necessary assistance to get them back to shore safely. Having a VHF radio on your vessel and wearing life jackets will increase a persons chances of survival at sea.”