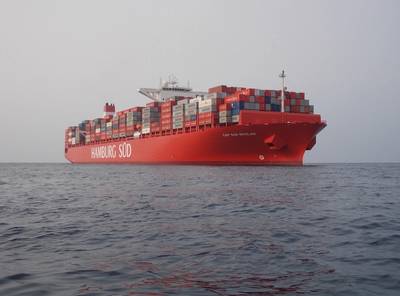 The Hamburg Süd Group reported it has increased its total turnover by 16.8 percent to 6,058 million euros, driven primarily by its takeover and integration of the container operations of the Chilean shipping company Compañía Chilena de Navegación Interoceánica S.A. (CCNI) in late March 2015 as well as the entry into the East-West trade lanes.

Shipment volume in the liner business rose sharply on the previous year, by 21.5 percent to 4,101 million TEU. Despite the weakness of the South American economies – especially Brazil, Argentina and Venezuela – this made it possible to meet the volume growth planned for the reporting year. A fleet capacity of 625,000 TEU (+16 percent year on year) propelled the Hamburg Süd Group into the ranks of the 10 largest container shipping lines worldwide for the first time.
Due to global overcapacity, freight rates declined by roughly 16 percent. The resulting loss of revenue could only partially be offset in the liner division by falling fuel prices, and restrictive capacity and cost management. The result in this sector failed to meet expectations and must be described as less than satisfactory, the shipper said.
Hamburg Süd said bulk shipping was also characterized by very difficult market conditions. Due chiefly to China’s lower raw material imports, demand for shipping space remained static while global fleet growth rose once again on the previous year. As a result, the revenue generated fell sharply. Bulk shipping fell well short of the result planned for the reporting period. Only the product tanker segment achieved a satisfactory result.
The shipper’s capital spending totaled 437 million euros, putting it above the level of the previous year. The number of employees increased to 5,960 on an annual average due to growth.
At 3.1 percent, global economic growth in 2015 was slightly below that of the previous year. Containerized sea transport, by contrast, at +1 percent, grew scarcely at all on a global level in the past fiscal year (2014: +5.2 percent). It can be assumed that the international division of labor is no longer rising and the containerization of general cargo is largely complete. With a capacity totaling 1.7 million TEU (+8.5 percent), by contrast, worldwide deliveries of container ship newbuilds – especially large container vessels – reached an all-time high in the past fiscal year. As a result of further increases in overcapacity, freight rates collapsed in almost all trades. Shipping companies attempted to adjust capacities in service in line with the static or even declining cargo volumes, so that the laid-up fleet worldwide increased sharply and, at 1.4 million TEU, reached the highest level of the past five years by year-end. Charter rates for containerships fell in part to historic lows and even failed to cover operating costs in some cases.
As of December 31, 2015, Hamburg Süd’s fleet comprised 189 vessels (compared to 168 in 2014), 48 of which are group-owned. A total of 130 ships were deployed in the liner services and 59 in the tramp sector (bulk carriers, product tankers). In the course of 2015, the enhancement and modernization of the Hamburg Süd Group’s fleet was largely completed with the delivery of three more newbuilds of the Cap San class (10,600 TEU). Four vessels, each with a capacity of 3,800 TEU, were ordered for delivery in 2017. The container pool increased by 22 percent to 562,000 units on an annual average.
According to the International Monetary Fund (IMF), the global economy and global trade will each grow by around 3 percent in 2016. While the U.S. economy and the eurozone are roughly retaining their dynamic, the recession in Brazil is expected to continue (-3.8 percent). At 6.5 percent, China is set to remain the growth driver in the world economy, though its dynamism is diminishing.
Following the significant growth of shipment volume in liner shipping in the past fiscal year, Hamburg Süd said it anticipates a further significant, albeit more moderate increase in carryings of some 8 percent for 2016 compared to the previous year. The once again above-average increase in excess of market growth is based primarily on the capacities and market shares built up in the past fiscal year, which are to be maintained throughout 2016 and selectively further expanded. Because freight rates are expected to remain under pressure due to continuing overcapacities and weak economic development, it is anticipated that the shipping group’s turnover will stay roughly the same.
In the current market environment, Hamburg Süd said it is also exposed to strong downward pressure on earnings. The projects successfully launched last year to achieve sustainable cost reductions will, therefore, also be further stepped up in 2016 by, among other things, measures to cut fuel consumption, the implementation of further synergies and economies of scale as well as progressive efficiency increases in processes. Where required, capacity reductions will be undertaken in individual trades.
In 2016, further consolidation can be expected in liner shipping, according to Hamburg Süd. The lines will only be able to regain reasonable levels of returns if capacities and cargo volumes will be in balance on a global scale. The result of Hamburg Süd liner shipping in 2016 is significantly dependent on the development of the global economy and global trade as well as of the industry’s ability to adapt to changed underlying conditions. No fundamental improvement of the 2016 market environment is expected in dry bulk shipping. For product tanker markets, the outlook for 2016 remains cautiously positive.
Hamburg Süd said it is one of the few shipping companies to have formulated verifiable and binding environmental targets at an early stage. In this process, the environmental strategy has focused on, among other things, the reduction of carbon emissions and energy consumption in reefer containers, as well as the abandonment of tropical timber for container floors to the greatest possible extent. The aim by 2020 is to reduce carbon emissions of owned and chartered container ships by 45 percent per unit of transport performance (TEUkm) compared to the 2009 base year. By the end of 2015, emissions had already been lowered by more than a third.