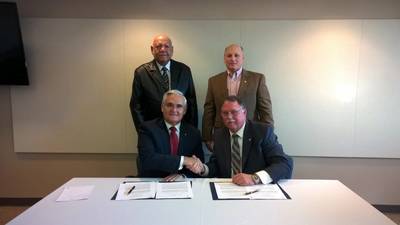 The signing of the ACP / Port of Lake Charles cooperation agreement(image: courtesy ACP)

The Panama Canal Authority (ACP) signed a cooperation agreement with the Port of Lake Charles in Louisiana earlier this week, which aims to attract new customers from the liquefied natural gas (LNG) industry; a strategy that builds upon the advantages that the expanded Canal will offer. Currently, LNG vessels cannot transit through the waterway due to their beam dimensions, which are too wide to fit the existing locks.

The agreement will promote cooperation in marketing activities, information exchange, market research, training and technology, among other initiatives that will benefit both the Canal and the Port of Lake Charles. The Port of Lake Charles is a deep water port with entry into the Gulf of Mexico, and is a national leader in the petrochemical industry, primarily due to the development of mineral resources such as sulfur, oil products and natural gas.

Several companies are expected to either start construction of new plants or expand their existing LNG liquefaction capacity over the coming years in the region, with the aim of exporting their product mainly to Asia through the Panama Canal. While in Louisiana, the parties responsible for signing the agreement, Jorge Quijano, Panama Canal Administrator/CEO and the Executive Director of the Port of Lake Charles, William J. Rase, were joined in a series of meetings by companies such as Southern California Telegraph & Energy LNG; Magnolia LNG; Venture Global LNG; Lake Charles LNG Company; Cameron LNG; Waller Point Marine and BG Group.

"My interactions with potential users of the expanded Canal while in Louisiana have been extremely relevant to understand their expectations, as well as promoting key business strategies and identifying ways to improve efficiency when the Canal Expansion Program is completed,” explained Quijano.

While touring Louisiana, Administrator Quijano discussed progress on the Panama Canal Expansion Program with businesspeople, government officials and representatives of Lake Charles’ Chamber of Commerce, including members of the Alliance for Economic Development. The tour included participation in a panel discussion with investors who are scheduled to build new LNG liquefaction plants with the Canal Expansion in mind.

The Administrator also visited the construction site of Cheniere, a gas liquefaction plant located in Cameron, Louisiana, which will begin production in the first quarter of 2016. Cheniere was the first company to receive approval from the U.S. government to export LNG. In late December 2014, the company received approval to build another liquefaction plant in Corpus Christi, Texas.