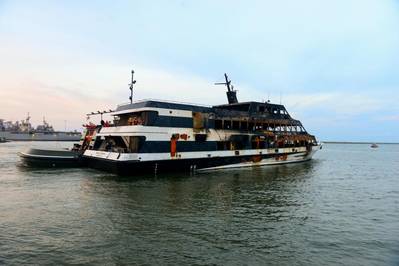 The fire-stricken passenger vessel Spirit of Norfolk was towed on Sunday to Colonna's Shipyard where U.S. Coast Guard and National Transportation Safety Board investigators will continue work to determine what ignited the blaze.

The fire, which broke out aboard the 169-foot-long yacht style passenger vessel last Tuesday, was confirmed extinguished as of 9:58 a.m. Saturday, the Coast Guard said. Officials said early on that the fire is believed to have started in the vessel's engine room before it spread up all three decks and through the entire length of the 169-foot vessel, though the official investigation is ongoing.

More than 100 passengers, the vast majority of them school children, were rescued from the blaze. No injuries were reported.

Crews continued dewatering efforts through the weekend, and final surveys and stability assessments were conducted to ensure the vessel was safe to tow. Divers also inspected the hull and sealed off access points to prevent water from entering.

The Coast Guard said it will continue to maintain oversight and monitor the vessel, which must request permission from the Captain of the Port for any future movement.

The vessel's operator, Hornblower's City Cruises, is working to determine whether the vessel will be declared a total loss.