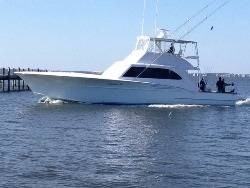 The Coast Guard responded Monday to an allision between a 58-foot charter boat with nine people aboard and the Bonner Bridge in Oregon Inlet, N.C.

A concerned boater aboard the vessel West Wind witnessed the allision and contacted Coast Guard Sector North Carolina watchstanders via VHF-FM marine radio channel 16 at approximately 5:45 a.m., stating that the charter boat, Sandra D, struck one of the support pilings of the bridge, resulting in a five-foot by 10-foot hole in the boat's bow and possible injuries to three of the passengers aboard.

A good Samaritan was in the area and assisted in taking the passengers off the Sandra D.

At approximately 6:10 a.m., the crew aboard the MLB arrived on scene and removed seven people from the good Samaritan's boat and transported them to shore where they were met by Dare County emergency medical services personnel.

The Sandra D's owner intentionally grounded his boat to keep it from sinking.  The Coast Guard crew aboard the SPC-SW then retrieved the owner and a crewman and took them back to shore.

Coast Guard watchstanders issued a safety marine information broadcast concerning the Sandra D's position and it potential to be a hazard to navigation.

North Carolina Department of Transportation personnel are scheduled to conduct a survey of the bridge.

"The mariners and the Coast Guard are extremely lucky that there were no significant injuries or damage to the bridge in this allision," said Lt. Lane Munroe, the command center chief at Coast Guard Sector North Carolina. "Mariners are reminded to use marked channels and transit at safe speeds to minimize the inherent risk of boating in the vicinity of structures. Using alternate bridge spans, which do not have fender systems to protect the bridge from vessel strikes and are not marked with navigational aids greatly increases the risk to the boating public as well as the vehicles using the bridge."