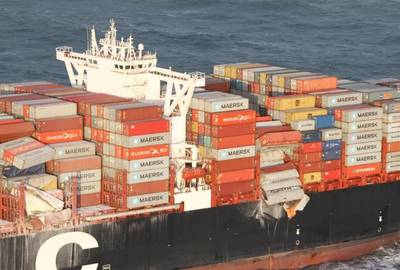 A load of dangerous chemicals that fell off one of the world's largest container ships into the North Sea washed up on a Dutch beach on Thursday, and more debris was expected to land overnight, officials said.

The Dutch Defence Ministry said the loss of 270 containers from the freighter MSC Zoe on Wednesday, some of them thought to contain hazardous chemicals, was one of the biggest incidents of its kind, they said.

It was unclear how many of the containers sank to the sea bottom and how many were still floating and could pose a hazard to marine traffic or beach scavengers who turned out in response to reports of the cargo spill.

A 25-kg (55-pound) bag of organic peroxide, a strong bleaching agent that can cause injury on contact with skin, was swept ashore on Thursday, among dozens of containers from the ship to have appeared on or near the Dutch islands of Terschelling, Vlieland, Ameland and Schiermonnikoog.

"The expectation is that more things may wash up on beaches tonight," Defence Ministry spokesman Sjaak Van Elten said.

At least three of the containers were thought to contain hazardous chemicals.

Dutch soldiers were summoned to help clean up the mess. Emergency services warned volunteers not to touch the containers, but scavengers and treasure-hunters also flocked to the jetsam, which included shoes, dolls and flat-screen TVs.

The peroxide was removed by emergency crews without incident, Friesland provincial authorities said.

But the Dutch Coast Guard said attempts to locate floating containers were being "hindered by multiple sport planes that have come to look ... We ask them to remain out of the area of this air space to prevent dangerous situations".

German authorities are leading the investigation into what caused the accident, which occurred in German waters near the island of Borkum.

An MSC statement said the containers were lost overboard during "heavy weather", and a salvage company had been hired to assist in the cleanup and search for missing items.

MSC said it was taking the incident "very seriously, both in terms of the impact of such accidents on the natural environment and in terms of any damage to customers’ cargo".

The MSC Zoe, one of the world's largest container vessels, is owned by Geneva-based Mediterranean Shipping Company. The freighter is now at port in Bremerhaven, Germany.