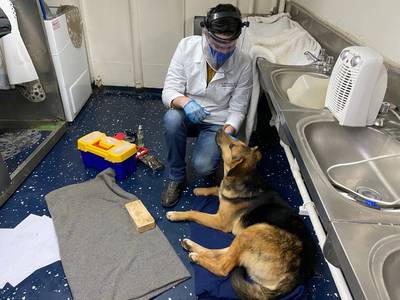 Chilean Navy sailors made a new best friend this week when they pulled a dog from the country's frigid coastal waters.

The sailors spotted the struggling dog about a mile offshore from the bridge of their ship and sent out a Zodiac raft to pull the pooch from the cold waters of Talcahuano Bay to safety.

"Yesterday, we were returning to our port base in Talcahuano after a mission to relieve marine infantry that were supporting the health quarantine in the Chiloe area, and approximately one mile from docking, from the ship's bridge we saw this dog swimming...," said Navy unit commander, Captain Federico Cavada.

The dog was spotted amid high winds and heavy rains of a weather system that had swept over the region.

Navy officials said they will try to determine whether the dog has an owner, but as the large brown pooch enjoys the sailors' cuddles, food, and the warmth of the naval base, there is no doubt that this is one lucky dog.

"Like Corporal Saavedra said, right now we're giving him love and we're checking to see if he belongs to someone...," Captain Cavada said.