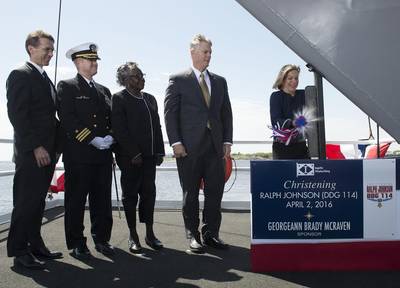 “It’s been more than a quarter century since the start of construction of Ingalls’ first Arleigh Burke destroyer, the Barry (DDG 52),” said Sean Stackley, assistant secretary of the Navy for research, development and acquisition, who delivered the ceremony’s principal address. “And as I look at the shipyard today, much has changed over the years, but much remains the same. That is the people, the work ethic, the proud workmanship exceeded only by the proud patriotism, passed down from generation to generation here at Ingalls. And also the care and respect that you hold for the young men and women who sail far from your shores under the American flag to defend our way of life here at home. These, thankfully, remain the same.”
DDG 114 is named to honor Pfc. Ralph Henry Johnson, who was awarded the Medal of Honor for his heroic actions that saved others during the Vietnam War. Johnson shouted a warning to his fellow Marines and hurled himself on an explosive device, saving the life of one Marine and preventing the enemy from penetrating his sector of the patrol’s perimeter. Johnson died instantly. The Charleston, S.C., native had only been in Vietnam for two months and a few days when he was killed at the age of 19.
Johnson’s sister, Helen Richards, spoke at the ceremony. “I know my brother is looking down and saying, ‘Why make a fuss over me?’” she said. “He was quiet, giving and caring. Whatever he was asked to do, he did it. I love my brother, and I wish he was here. But I know he is in a better place. To ship commander Jason Patterson: Ralph will be with you and your crew at all times when this wonderful ship goes to sea.”
On April 20, 1970, President Richard M. Nixon posthumously awarded Johnson the Medal of Honor, the highest recognition and honor a member of the United States military can receive. On Sept. 5, 1991, 23 years after his heroic act, the Veterans Hospital in Charleston was renamed the Ralph H. Johnson Veterans Hospital.
Georgeann McRaven, wife of retired Adm. Bill McRaven, is the ship’s sponsor and smashed a bottle of sparkling wine across the bow of the ship, officially christening DDG 114 as Ralph Johnson. “God bless this ship and all who sail on her,” she said.
Ingalls has delivered 28 Arleigh Burke-class destroyers to the Navy. Other destroyers currently under construction at Ingalls are John Finn (DDG 113), Paul Ignatius (DDG 117), Delbert D. Black (DDG 119) and Frank E. Peterson Jr. (DDG 121).
“This program—like our LPD and National Security Cutter programs—is proof of the benefits of a hot production line and our ability to improve on cost and schedule with each new ship,” said Ingalls Shipbuilding President Brian Cuccias. “This ship is a true example of moving specialized work teams from one ship to another and how that can improve efficiency and affordability. And while we’re proud of our performance on this ship, we’re also proud that it is named after a true American hero. Ralph Henry Johnson was only 19 years old when he sacrificed his life for someone else’s. His story is tragic, but it’s also inspiring. It reminds us that anyone—regardless of age or rank—can make a difference.”
Mike Petters, HII’s president and CEO, also attended the ceremony, along with platform speakers Sen. Roger Wicker, R-Miss.; Rep. Steven Palazzo R-Miss.; Vice Adm. Ted Branch, deputy chief of naval operations, information warfare, and director of naval intelligence; and Lt. Gen. Ronald Bailey, the Marine Corps’ deputy commandant, plans, policies and operations.
Arleigh Burke-class destroyers are highly capable, multi-mission ships that can conduct a variety of operations, from peacetime presence and crisis management to sea control and power projection, all in support of the United States’ military strategy. DDGs are capable of simultaneously fighting air, surface and subsurface battles. The ship contains myriad offensive and defensive weapons designed to support maritime defense needs well into the 21st century.